Suggestive billboard upsetting some in Bethesda

The billboard probably wouldn\'t raise an eyebrow in Hollywood, but the image of a curvaceous woman in a tight-fitting dress is drawing stares at Woodmont Avenue and Elm Street in downtown Bethesda.
Listen now to WTOP News WTOP.com | Alexa | Google Home | WTOP App | 103.5 FM
(1/4) 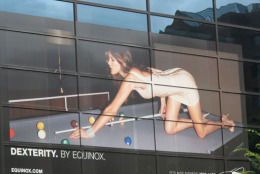 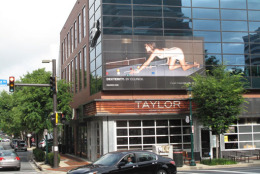 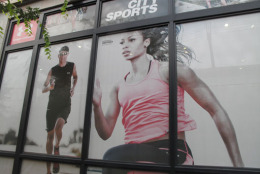 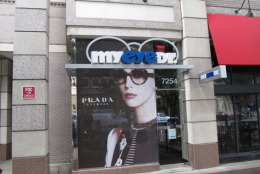 WASHINGTON – The billboard probably wouldn’t raise an eyebrow in Hollywood, but the image of a curvaceous woman in a tight-fitting dress is drawing stares at Woodmont Avenue and Elm Street in downtown Bethesda.

“I would rather not see it there,” says Deborah Vollmer, a semi-retired attorney who lives in Chevy Chase.

“I think it’s a sexist ad. I’m not too happy to see it,” Vollmer says.

“But I also agree strongly in the First Amendment and freedom of expression.”

A quick survey of the area finds photographic images displayed on other shops nearby, including a sporting goods store and a spa, but none quite like the Equinox image.

Pam Holland of Chevy Chase is circulating a petition to have the Equinox billboard removed.

Not everyone is offended by the sign. Andrew Lockman has a clear view of the billboard from his sales office across Woodmont Avenue.

“I’m okay with it. Good looking girls sell lots of things including beer, cigarettes, why not gym memberships?” Lockman says.

Holland, who has enlisted the support of friends and neighbors in her effort to force Equinox to remove the billboard, says she understands that the fitness center may not mean to offend. But, she finds the sign inappropriate for small- town Bethesda.

“My daughter and her friends walk there from Bethesda Chevy Chase High School and we just can’t avoid the image,” she says.

When asked about the billboard featuring the picture of the leggy woman perched on a pool table, cue stick in hand, Curtis Washington of the District took a drag on his cigarette, squinted through the curling smoke and said simply, “It’s sexy, yea it’s sexy.”

Officials at Equinox corporate headquarters in New York have not yet responded to requests for comment on the billboard and the petition effort to have it removed.