As Stones roll into D.C., fan gets ready for concert 154 (Video)

Doug Potash, aka \"Stones Doug,\" will be in the audience at Verizon Center Monday night, for perhaps could be the Rolling Stones last-ever live performance in the United States.
Listen now to WTOP News WTOP.com | Alexa | Google Home | WTOP App | 103.5 FM
(1/4) 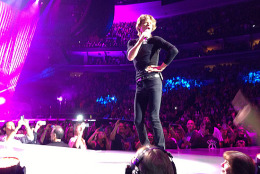 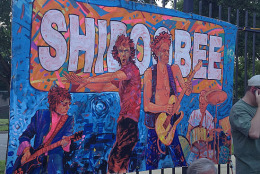 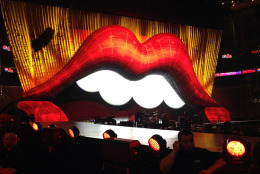 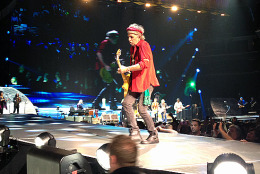 PHILADELPHIA – The Rolling Stones roll into D.C. and Verizon Center Monday night, for perhaps the band’s last-ever live performance in the United States.

If you’re going, is it your first Stones show? Or maybe your fifth, or even tenth time?

That’s pretty good, but we’d like to introduce an area man who’s seen the band in concert many, many more times than that.

His name is Doug Potash, but goes by the nickname “Stones Doug.”

I caught up with Stones Doug Friday night at a tailgate party outside Philadelphia’s Wells Fargo Center, a couple hours before the second of two Stones shows there.

“It all started, I think, the first time I turned on Ed Sullivan, and saw these guys in the sweatshirts, all ratty hair and everything, come out, and the opening organ on ‘Time Is On My Side,'” says the 62-year-old Annapolis man.

And, exactly how many Rolling Stones concerts Stones Doug seen? Brace yourself.

Monday night at Verizon Center will be 154.

And, out of those concerts, all over the world, one of his all-time favorites was another D.C. performance.

“One of my five favorites is the Warner Theater, 1978,” says Potash.

“When they blew out the sound system at the very end. That’s why the show ended, during ‘Jumpin’ Jack Flash’ in the encore. All you heard was Charlie’s drums and they were gone. They just ran off the stage.”

When I ask Stones Doug if he can choose just one favorite Rolling Stones song, he answers immediately.

“Shidoobee with Stones Doug” is the name of the website Potash created years ago, inspired by the refrain sung repeatedly by Jagger in “Shattered,” the last song on the band’s 1978 LP “Some Girls.”

“I started the ‘Shidoobee‘ website in 2000 and I thought I was the only one who loved the Stones as much,” Potash explains.

“And then, all of a sudden, all these people, it got nuts. And now, we have 7,000 members. We’ve had 85 million visits. And the camaraderie of people from all over the U.S. and the world who come for every show. We organize parties. We know anywhere in the world we go, we have a Stones fan.”

Eventually, I have to ask Potash: Will Monday night’s concert be “The Last Time,” to quote an early hit, for the Rolling Stones in the U.S.?

“I heard that in 1972,” he says with a grin. “There’s a rumor November, L.A. You know, who knows. They’re supposed to announce Europe in the fall. We’ll see. That’s the thing. You never know and think that’s it and they pull you in again. Everybody’s getting ready, saying ‘Now I can save for retirement.’ Nope! We’re touring again, we want your money. But we love ’em.”

Check out some short videos below from the Philadelphia concert: