A system glitch in a pay-by-cell D.C. parking system left a Fairfax, Va., man the victim of an erroneous ticket, a WTOP TicketBuster investigation has found.
(1/3) 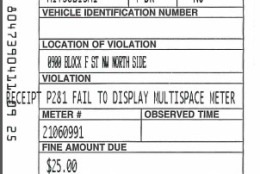 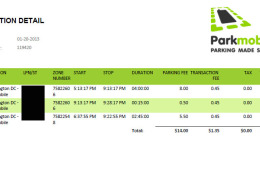 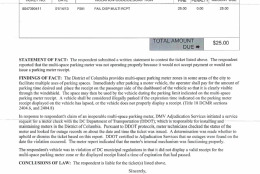 WASHINGTON – A system glitch in a pay-by-cell D.C. parking system left a Fairfax, Va., man the victim of an erroneous ticket, a WTOP TicketBuster investigation has found.

Jeff Liang was visiting the Smithsonian when the Jan. 14 ticket was issued for failing to display a multi-space meter receipt in the 900 block of F Street NW. A D.C. Department of Public Works (DPW) employee ticketed Liang at 5:55 p.m.

Parkmobile is a private company that allows drivers in D.C. to pay for a spot over the phone or through a smartphone app. Drivers who use the service do not have to display a dashboard receipt.

The day he received the ticket, Parkmobile records indicate Liang paid for four hours of parking at 5:13 p.m.

“So we filed an appeal, and in mid-April we received a response from the DMV saying I was liable.”

All tickets in the District are adjudicated through the Department of Motor Vehicles. Hearing examiner Tonia Dansby issued the ruling on April 18.

“The respondent reported that the multi-space parking meter was not operating properly because it would not accept payment or would not issue a parking meter receipt,” writes Dansby.

“DDOT (District Department of Transportation) certified to Adjudication Services that no outages were found on the date the violation occurred. The meter report indicated that the meter’s internal mechanism was functioning property.”

Liang was confused, since he claims he never mentioned anything about the meter itself.

“We thought this would be an easy appeal because I clearly had the receipt with the zones that matched and a time stamp. I sent all of it to them. But it seems like they didn’t even read what I said at all,” he says.

“While Mr. Liang provided his Parkmobile invoice that shows he paid for parking; he did not submit the Session Details receipt from Parkmobile,” she says.

“Therefore, he was found liable because he did not submit documentation to show where his vehicle was parked and that he had paid.”

Liang says that’s wrong, but with WTOP’s assistance, he sent Newton the information for which she was looking. On May 1, the DMV agreed to dismiss the ticket.

Newton says drivers in a similar situation should submit a “Parkmobile Session Detail” receipt to the DMV, including the following:

Such information, Newton insists, should help other Parkmobile users in a similar situation.

Despite learning he was off the hook on May 1, WTOP wanted to know why the parking enforcement officer didn’t notice Liang paid with his Parkmobile app.

When a parking enforcement officer is driving around, a GPS device syncs with the Parkmobile database to list all current transactions on that specific block. In most situations, the officer can’t print a ticket if the vehicle is on the Parkmobile list.

So what happened in Liang’s case?

“The ticket to Mr. Liang occurred because the Parkmobile database was in conflict with the signage. As an example, a similar conflict can occur between the price of an item in a grocery store’s computer and the item’s price that appears on the shelf,” says DPW spokeswoman Linda Grant.

She referred all specific questions to Parkmobile and DDOT.

DDOT spokesman Monica Hernandez tells WTOP that Parkmobile had the wrong zone number in the database provided to DPW and the DMV.

The database has since been updated with the correct zone number.

Therefore, the parking enforcement officer saw Parkmobile transactions for the wrong block and Liang’s wasn’t there.

Hernandez says the error has been fixed, calling it an isolated incident.

Meanwhile, Liang is pleased this is over, but tells WTOP he may consider using Metro from now on.

“Now we’re leery of whether D.C. and Parkmobile are on the same page in getting the right information,” he says. “How do we protect ourselves from this happening again? Because then it starts this big headache when the driver has done the right thing on his end.”

If you think you’re the victim of a bogus speed camera, red-light camera or parking ticket in D.C., Maryland or Virginia, WTOP may be able to help you cut the red tape. Email your case – along with documentation – to ticketbuster@wtop.com.