On a two-hour ride on the Anacostia River, Jim Foster with the Anacostia Watershed Society points out the beauty of the river and the challenges it continually faces.
Listen now to WTOP News WTOP.com | Alexa | Google Home | WTOP App | 103.5 FM
(1/4) 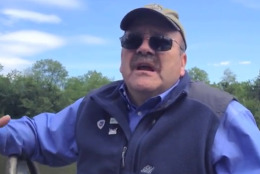 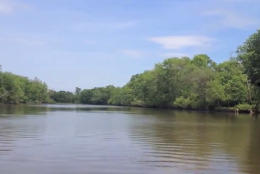 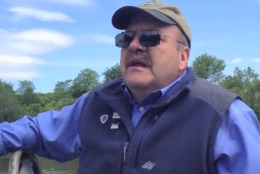 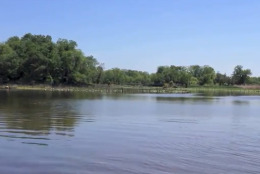 BLADENSBURG, Md. – Under a blue sky on a recent afternoon, an outboard motor sputters to life alongside a dock at Bladensburg Waterfront Park.

As Jim Foster, president of the Anacostia Watershed Society, backs a pontoon boat into the Anacostia River, his enthusiasm for the waterway quickly becomes clear.

“This was an incredibly rich estuary when Europeans first came here,” Foster says. “At the turn of the last century (1900), they were taking 4 million pounds of shad out of this river.”

It doesn’t take long to see how much has changed in over a century, and the challenges the Anacostia watershed now faces.

“See that concrete structure?” Foster asks as he guides the pontoon boat down the river toward Nationals Park. “That’s called the Northeast Tunnel. And that is where about a billion gallons of sewage a year dumps into the Anacostia River. I said a billion. That’s with a ‘B.'”

For the uninitiated, he goes on to explain that there’s a combined sewer overflow system beneath the streets, sidewalks and buildings of the nation’s capital. When the clouds open up and the area gets a good soaking, stormwater runoff fills the pipes and much of the sewage has nowhere to go but into local waterways.

And it’s not a new problem.

“We have been dumping raw sewage in the river every time it rains for the last 140 years,” Foster says.

The result of the dumping, combined with other human-created factors, has been a very sick waterway.

“You could not have built the Nats’ stadium there 30 years ago,” Foster says. “The smell would have driven you away. The smell was unbelievable.”

But in recent years, efforts to cure the Anacostia River have increased and continue to this day.

Continuing down the river, Foster points out the ongoing Anacostia River Tunnel Project, which he says is intended to hold up to a billion gallons of raw sewage when it rains.

The stored waste, rather than flowing into the fiver, would eventually be treated at the Blue Plains Advanced Water Treatment Plant.

Then there’s the war on garbage, in which Foster says progress is being made. He says D.C.’s bag fee has been very successful in keeping plastic bags out of the river.

“Oh, absolutely,” he says. “We run one of the trash traps in Nash Run and the latest data is showing that the five-month average is trending down from its peak right before the bag bill.”

He adds that Montgomery County’s bag law is working “pretty well” and that efforts are underway to get Prince George’s County to follow suit.

Meanwhile, the problem of tires being dumped in and along the river is also shrinking, although the watershed society reports that during its recent Earth Day cleanup, more than 400 tires were found – 200 in one place.

At the end of the day, Foster says the Anacostia River is still in critical condition, but that the river is slowly getting healthier.

“We have bald eagles back. We certainly have a lot of herons, egrets, osprey, Kingfisher,” he says.

Turtles also hop off logs as the boat putters by.

The fervent hope of Foster and others is that the Anacostia River will be swimmable and fishable again by 2025.

Along with keeping sewage, trash and other pollutants out of the waterway, another key to reaching that goal revolves around getting people back to the Anacostia and reconnected to the river.

“It’s telling our story, it’s bringing the kids out,” Foster says toward the end of a two-hour tour. “And they’ve been told, ‘Don’t go there.’ So we’re trying to start that, so we can break that cycle with them.”

“Isn’t this beautiful, though?” he asks as the boat heads back to the dock.

“You could be on the Shenandoah or the Amazon or something. You’re in the heart of Washington, D.C., dude! I mean, it’s unbelievable.”