A statue of a Confederate soldier that has stood in front of the historic courthouse in Loudoun County since 1908 is now being called inappropriate and a local lawyer says it should be removed.
Listen now to WTOP News WTOP.com | Alexa | Google Home | WTOP App | 103.5 FM
(1/4) 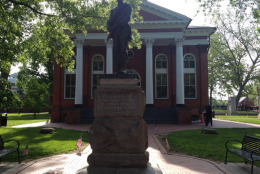 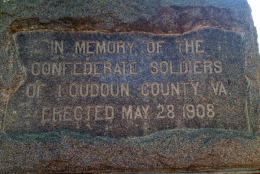 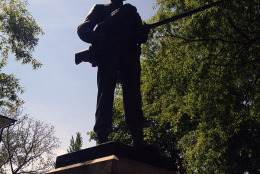 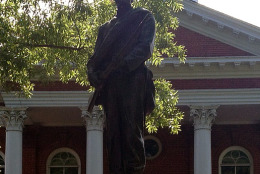 LEESBURG, Va. – A statue of a Confederate soldier that has stood in front of the historic courthouse in Loudoun County since 1908 is now being called inappropriate and a local lawyer says it should be removed.

The statue was erected to honor the war dead at a time when many Civil war veterans were still alive.

The statue shows a Confederate soldier standing guard with his rifle ready.

An inscription, carved into the stone monument, says, “In memory of the Confederate Soldiers of Loudoun County, Va. Erected May 28, 1908.”

But Loudoun County, deeply divided over the war in 1861, may not have healed old wounds.

Attorney John Flannery, who often has cases in the courthouse, wants the statue moved elsewhere. He says it’s intimidating to some of his clients.

“It deters people. It chills them from believing they can get a fair shake in court,” he says.

Flannery says he’s actually had clients who are afraid they won’t get justice in a courthouse after seeing the statue.

“It’s a living, active courthouse, which already has challenges in terms of discrimination in terms of persons of color, and not only them.”

But he will get an argument from many local folks. Local historian Gene Scheel says the statue is not a symbol, it’s history.

He says intact remnants of the past are good teaching tools.

“Practically every county that I’ve been to in Virginia has its Confederate memorial or monument,” says Scheel, noting that Richmond has a whole row of them.

On the North King Street in front of the Loudoun Courthouse, there was mixed opinion about the statue.

“I am actually from the North and was a little bit surprised by it when I moved down here,” says Annie Carlson. But adds that she can understand why that statue is there.

But Richard Gallagher, who was actually once a client of Flannery’s, says he’s surprised by the idea of moving the statue.

“I think its crazy. It’s part of our history,” he says.

Flannery thinks the statue should be at a museum or a cemetery, not the courthouse. He hasn’t decided yet how to move forward with his request for moving the statue, and he says he does expect opposition.