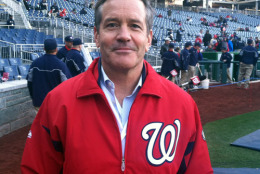 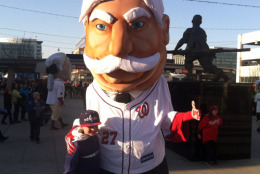 WASHINGTON – Nationals fans know the names Harper and Strasburg, but Wednesday night the spotlight was on a guy named Taft.

William Howard Taft is the newest racing president at Nationals Park, and two of his great-grandsons, John and Hugh, came to the ballpark to celebrate.

John Taft is the chief executive officer of RBC Wealth Management and lives in Minneapolis. He says about 300 of RBC’s employees and clients also came to the ballpark Wednesday.

John started the game by standing next to the Taft mascot — who everyone calls “Bill” — and delivering a hearty yell of “Play ball!”

He also came bearing gifts for his racing relative.

“I brought for my great-grandfather, to help him get started in his new … career as a semi-professional athlete, a T-shirt from The Taft School, which is a boarding school in Watertown, Conn., founded by his brother, along with a water bottle,” he said. “Hopefully it will help him improve over the course of the season.”

John is a longtime baseball fan.

“I grew up in Connecticut. My brother who is here was a Red Sox fan, I was a Yankees fan, so we were a split family,” he said. “I moved to Minnesota where the current owners of the Twins owned my business, so of course during that period of time I had to be loyal to the Twins.

“But I would have to tell you, I’m a free agent now, they no longer own my business. I’m a Nationals fan tonight, and that’s all that matters.”

The real-life President William Taft was a tall and heavy man.

“I have to wear a big curly W because, of course, my great-grandfather has signed a one-year contract after passing his physical, which we were worried about,” John joked.

It was John’s first time at Nationals Park, and he was impressed.

“I’ve been to a lot of baseball parks and this is definitely one of the best designed and most beautiful. It’s fabulous,” he said.

He also hopes Bill can visit his hometown sometime.

“I’ve asked the owners of the Twins to consider inviting him out for a special occasion, but they haven’t responded yet,” he said.

Before the night was over, John had another job to do: Hold the tape at the finish line of the Presidents Race.

Early in the race, Bill had a sizable lead. But George took Bill down, and Tom won.

John says he’ll definitely stay on top of what Bill is up to.

“None of us know what President Taft is going to be able to do this season as one of the racing presidents. (I’m) looking forward to finding that out.”