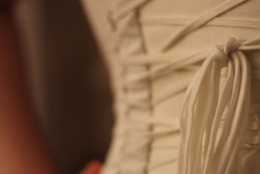 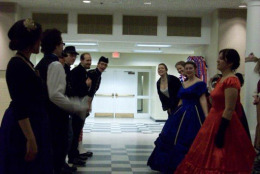 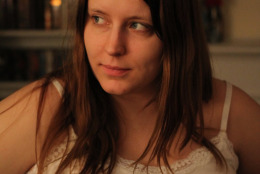 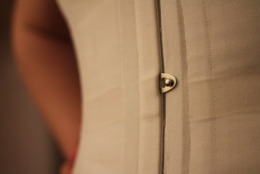 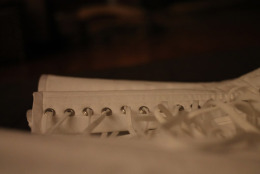 WASHINGTON – Three nights before the Victorian Ball at the University of Mary Washington, an annual event held by the historic preservation department at my alma mater, a friend laced me into an Edwardian corset in my dining room so I could conduct a crucial test: Was it possible to dance while wearing such a restrictive undergarment?

I sucked in my waist, trying to ignore the large Valentine’s Day dinner I had eaten only an hour earlier. On the day of the ball, I planned to eat frequent small meals to avoid the situation I was dealing with at that moment, but I wanted to get an accurate sense of the corset’s effect ahead of time. The garment buckled out from the center of the laces strapped across my back, straining against the stomach bump caused by the large burger I had so eagerly devoured. Not one of my smartest ideas.

As my friend adjusted the laces to make them even and tied them together firmly, I held my breasts in place and tried not to expand my lungs by breathing. This wasn’t the first time I had been laced into this corset, and I didn’t need to hold onto a doorframe to keep myself from falling backward like before. I just needed the corset to be tight enough to support my upper body but loose enough so I could move in it.

I pranced into the living room, running from one end of it to the other and waving my arms almost as high above my head as I normally can. The corset was restrictive, but I could still go through the motions of the lively Virginia Reel, one of my favorite dances at the ball. It would work.

An Edwardian corset causes the peculiar sensation of being compressed from just above the bust to the middle of the hips. It pushes everything away from the waistline, making the curves of an hourglass figure bigger, rounder and smoother.

On Saturday, the day of the ball, I had forgotten about the impact this has on my body. Suddenly, my judgment about the places I could fit through was dead wrong. I bumped into a chair on several occasions while passing behind it, making embarrassed apologies to the friend seated in it who was clutching her own dress away from my feet and eyeing me surreptitiously.

So this is why the women of Downton Abbey need maids, I thought as I tried to get dressed. Putting my skirt on with the usual modern method — one foot after the other — was not an option, since I had lost my ability to bend over and touch the floor. My beautifully made, steel-boned corset would not allow it.

Instead, I pulled the skirt awkwardly over my head and settled it at my waist, which was several inches smaller now that I was wearing the corset. My hair was already done. I only needed to apply a light layer of makeup (because heavy makeup was a sign of whoredom in the Victorian era) and pull on my velvet jacket and satin waist sash.

The jacket was straight out of the flying scene between Jack and Rose in the movie “Titanic.” I commissioned it from a roommate who has the sewing skills of a master seamstress and the eye of a person who can adapt clothing patterns. I first wore the jacket to her 100-year anniversary of the Titanic party in April, as well as the skirt and the same corset I was wearing to the ball this year. The entire outfit cost about $1,000, almost half of which went to the corset made by an online shopkeeper I found on Etsy. I sent her my measurements, and through some small miracle, the corset fit perfectly.

The skirt from that outfit was a hobble skirt, so it didn’t make sense to wear it to a ball, especially when Rose herself had some trouble stepping up on the doomed ship’s railing while wearing it in the movie. I swapped it for a navy blue floor-length skirt instead, keeping the poofy old-fashioned look but creating room for my legs to move. The clothing from that time period may have levied women with the inability to move, but it wasn’t going to stop me from dancing.

The corset could, however, stop me from sitting normally. My options were perching on the edge of the chair with my legs crossed at the ankles beneath me or leaning back in a very stiff, board-like fashion. Sitting with the good posture that always seems to be implemented in pop culture representations of the Victorian era is a lot easier to do in a corset.

The ball was everything I hoped it would be. Friends and dancing, lovely outfits and gentlemen, laughter and fun. I harbor a nostalgic wish that the world will revive dances like the Soldier’s Joy, the Gothic Reel and the Spanish Waltz, if only for their intellectual value, inherent charm and social nature.

After I danced the Farewell Waltz with my escort and picked up my cape to go home, I walked as quickly as I could across campus, passing college students in sweatpants and jeans as my skirt billowed behind me. The night air was frigid on my chest, but more importantly, I had to use the bathroom — a seemingly impossible task in a corset.

As my friends and I undid the laces on our corsets in the apartment where we got ready for the ball, we grabbed our clothes and ran for the bathroom. Evidently, my friends had the same idea of waiting until the event was over. Relieved to be free, I gladly put on my pre-ball clothing and headed to find food. Five hours of dancing in corsets with little to eat or drink had left us exhausted and hungry.

The problem was that the corset had altered the shape of my waist. My intestines were none too happy about the switch. The phrase “corset training” came to mind as I scarfed down a slice of homemade pizza, and again the next day when nothing I ate went down well. After a day or so, I was fine. But the slender waistlines of corseted women in bygone eras seem much more plausible to me now that I’ve worn a corset. Gaining weight is awfully hard to do when you can only eat small bites of food for hours at a time.

As ridiculous as the entire affair seems sometimes, I do it year after year, and not just to catch up with old college friends who also return for a night of Victorian frivolity. There are lessons to be learned from donning the clothes of a bygone era and prancing around a dance floor. My understanding of women’s issues in the early 1900s is illuminated by knowledge of the physical challenges they also had to overcome.

It is much harder to fight for equal rights in a corset.

Editor’s Note: Off the 8’s is a new WTOP Living feature, in which staff inside the Glass-Enclosed Nerve Center share personal stories from their lives.