As they spin and pivot in sync, the whole class stops on beat and kicks in the air. This is not your average exercise class. It\'s Doonya.
Listen now to WTOP News WTOP.com | Alexa | Google Home | WTOP App | 103.5 FM
(1/10) 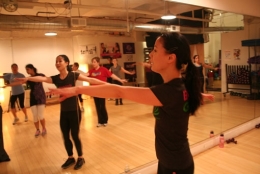 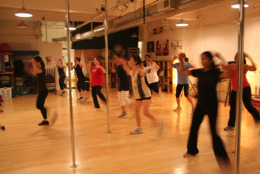 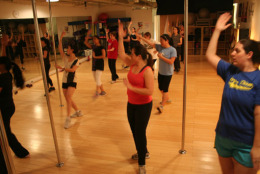 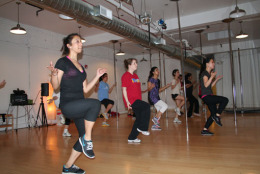 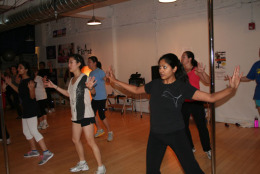 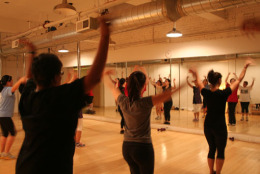 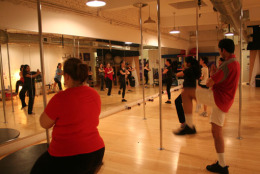 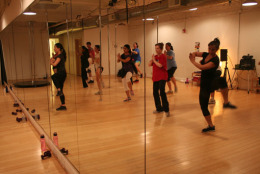 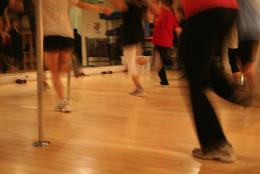 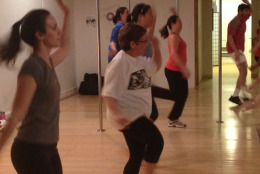 WASHINGTON – As they spin and pivot in sync, the whole class stops on beat and kicks in the air. This is not your average exercise class. It’s Doonya.

Old and and young, men and women jump along to songs straight from the Bollywood movie sets of India.

The high-intensity exercise class, started in Washington in 2000, is growing in popularity. Unlike other dance classes, the intimidation factor is low. Few people know what they’re doing when they start Doonya, participants say.

“It just gets easier the more times you do it,” says Natalie Palmer who has been attending a class off Connecticut Avenue for seven months.

“It’s not something you come and say, ‘I’m great at this.’ You just have to let yourself look kind of foolish,” Palmer says.

While looking foolish isn’t the goal, it’s part of the process says Kajal Desai, who co-founded the Doonya program.

“We encourage people to laugh at themselves a bit. Feeling uncomfortable is totally a part of it. It’s not movements that they may have done before we say that in class, its completely okay to feel that way,” Desai says.

Desai and her business partner Priya Pandya both have roots in India and were trained in classical dance. They met through friends in Washington, working at Booz Allen Hamilton and the World Bank at the time, neither expected their love of dance would turn into an exercise style.

“We were lucky to start in a place where there was a little bit of knowledge around Bollywood and that film industry and the dance that comes from it,” Desai says of Doonya’s reception in Washington.

Now the classes are in New York and Los Angeles, and the two have released a DVD of their Bollywood-inspired workout.

Doonya uses four different styles of Indian dance that make up Bollywood dancing and work all parts of the body. Palmer can attest to that.

“It’s a great workout. I’m exhausted and sweaty and smelly. There’s legs, we do some weights in there. We do some planks. So they really have worked out a system where you work everything,” Palmer says.

Jeannie Baumann started taking the classes in 2007. Now she’s an instructor of the daily classes in Washington.

Find a class in the Washington area here.