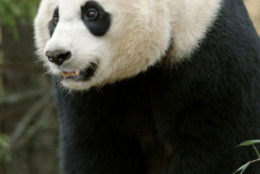 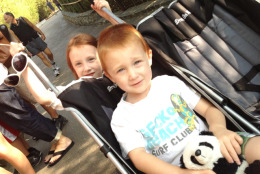 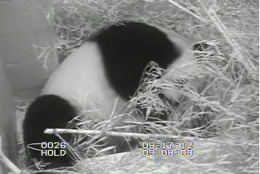 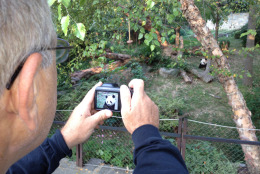 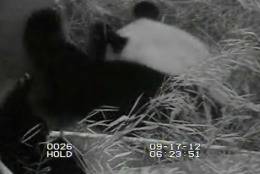 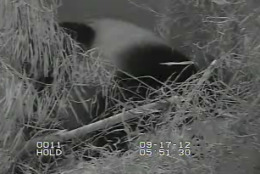 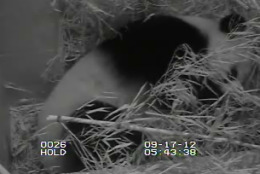 Zoo staff can hear the cub, but had not seen the cub until Monday morning.

“We think we saw it for a fleeting instance,” Dr. Don Moore, associate director of animal care sciences at the National Zoo, tells WTOP.

The cub was born at 10:46 p.m. and staffers have been watching the pandas on the panda cam.

The cub is crying loudly, and Mei Xiang has been quieting the newborn down.

Moore and the rest of the National Zoo staff have been watching the panda cam to see how Mei Xiang is interacting with the cub.

Here’s the panda cam where it might be possible to see the cub. (Hint: You will need to close the newsletter sign-up window that opens over the panda cam.)

“We are giving Mei Xiang complete seclusion. Everybody is being very quiet, and it will be that way for a couple of weeks,” Moore says.

“Mei Xiang is behaving exactly the same way she did when Tai Shan was born,” says Suzan Murray, the zoo’s chief veterinarian.

“She is cradling her cub closely , and she looks so tired, but every time she tries to lay down, the cub squawks and she sits right up and cradles the cub more closely. She is the poster child for a perfect panda mom,” Murray says.

The cub is about 4 ounces big — the size of a butter stick. Mom is roughly 250 pounds.

This is the second cub for 14-year-old Mei Xiang and 15-year-old Tian Tian.

Both cubs are the result of artificial insemination.

The National Zoo says Mei Xiang built a substantial nest in her den for this cub.

It’s not expected that the new mom will come out of her den or even eat or drink for at least a week.

After five consecutive pseudopregnancies since 2007, the zoo said the chances of a cub were estimated to be less than 10 percent.

The zoo says one factor that may have helped Mei Xiang conceive was a return of her normal estrus cycle in April. Sperm from Tian Tian collected in 2005 was inseminated twice in April.

Zookeepers said they started getting ready for the family addition after watching Mei Xiang spend a lot of time licking herself and cradling toys.

Veterinarians will conduct their first exam of mom and cub after the two have had a few weeks to bond.

The cub will stay with Mei Xiang for the next four years.

The zoo is not likely to put the pandas on display for couple of months, Moore says.

Tai Shan, the first cub, became quite the celebrity, gaining near rock-star status until being returned to China in 2010 at age 4.

Mei Xiang and Tian Tian will be in D.C. until December 2015 under a deal the Smithsonian has with China.

Pandas have a long history at the zoo. In 1972, Ling-Ling and Hsing-Hsing arrived as a gift from China. They lived more than 20 years at the zoo and produced five cubs, although none survived.

The National Zoo is using sending out updates on Twitter using #cubwatch.