Holidays: 'Enchant' shines with millions of lights in Nats Park | Where to see holiday lights | Send in photos of decorations | How to give greener this season
Home » Latest News » Hero bartender back to…

Hero bartender back to work, but medical bills mount

A D.C. bartender who was stabbed eight times in May while protecting a patron is finally back at work this week. Another fundraiser is planned to help pay his bills.
Listen now to WTOP News WTOP.com | Alexa | Google Home | WTOP App | 103.5 FM
(1/2) 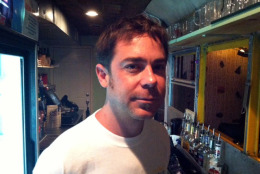 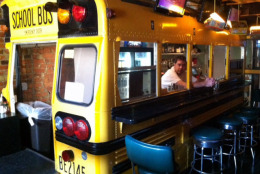 WASHINGTON – A D.C. bartender who was stabbed eight times in May while protecting a patron is finally back at work this week.

But Mike Boone, who tends bar at Trusty’s Bar in Southeast, is still struggling to pay big medical bills, and a fundraiser is planned for him at the Capitol Lounge Friday night.

“Every day I think about it, and I feel pretty lucky to be alive after something like that,” says Boone of his ordeal.

“I have a lot of nightmares and definitely relive the moment,” he says.

Boone was walking a woman home from Trusty’s Bar on Pennsylvania Avenue in Southeast in the early morning hours of May 1, when a man jumped out of nearby bushes and tried to steal the woman’s purse.

Boone grabbed the purse back and got in a quick fight with the would-be thief. Boone didn’t realize at the time that the man he was fighting had a knife with a 6-inch blade.

Boone says he has no regrets about fighting back.

“If someone’s going to do something like that, I’m going to stand up. I’m not going to watch it just happen. I don’t think that’s right, and if it kills me, I still believe I did the right thing.”

Boone’s injuries were so serious he was airlifted to a hospital, where he stayed for four days.

One of his lungs was punctured, but otherwise, his vital internal organs were intact.

“I have one (stab wound) in my groin that (was) half a centimeter away from a major artery. I could have bled to death in just a couple of minutes if it would have hit that,” says Boone.

The man who stabbed Boone was arrested and charged with assault with intent to kill. He later pleaded guilty to a lesser charge and is scheduled for a September sentencing.

According to Boone, the man has a lengthy criminal record.

“He left his parole papers and his ID in a puddle of my blood, and that’s how they found him so quickly,” says Boone.

Boone is concerned that even if the man is sentenced to prison, he’ll be out on the street again in just a few years.

Today though, Boone feels great physically, and he’s been doing a lot of bike riding and swimming.

Boone has no health insurance, although he says he plans to get coverage soon. His medical bills now total about $55,000, and he expects them to top $60,000.

A fundraiser held for him at Trusty’s about two weeks after the stabbing generated about $10,000 in donations, and Boone got an additional $7,000 in donations from random strangers who heard his story, which went viral on the Internet.

“I received checks from people from all over the world. People I’ve never heard of, which was pretty amazing,” Boone says.

The money rolled in from places like Australia, China, India and Scotland.

“Sometimes it was $10 or $5, sometimes it was $500 though, and I don’t have the slightest clue how to thank all these people, but I do have their addresses and they’re definitely going to get some sort of thank you from me for sure,” says Boone.

He used some of the money to pay bills and rent while he was recovering and out of work. The rest is in a savings account, but the bills are mounting.

“I’ve got two letters at my house right now explaining to me the process that it’s actually going through if I don’t pay the hospital bills. In fact, they’re probably already on their way to a collection agency.”

Because of this, friends have organized a second fundraiser for Boone from 8 p.m. to midnight Friday at the Capitol Lounge, another bar in Southeast.

There will be drink specials, and items donated by other local businesses like H Street Country Club, Rock and Roll Hotel and Union Pub will be raffled off to raise money.

Those unable to attend the fundraiser but would still like to help can donate to Boone through PayPal. Donations can be sent to his email address: mike.boone@yahoo.com. If donations are sent as a gift, there won’t be a charge for the transfer.