Stand down: New Redskins uniforms about the same (PHOTOS)

The mantle of NFL apparel manufacturer will soon pass from Reebok to Nike, who plans to being a five-year stint as the exclusive provider by releasing new designs for all 32 teams on Tuesday, according to BleacherReport.com.
Listen now to WTOP News WTOP.com | Alexa | Google Home | WTOP App | 103.5 FM
(1/2) 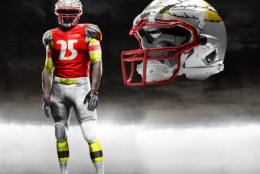 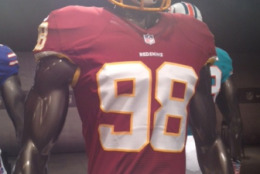 Nike announced its new uniforms Tuesday morning, and there are no changes to the Redskins jerseys or helmets of note. The “Indian head” remains, and the colors are the same.

How do you feel? Relieved? Disappointed? Post in the comments section to let us know.

WASHINGTON – D.C.’s home team is in desperate need of a makeover on the gridiron. One new plan might be enough to attract the attention of RGIII, and perhaps even quell the belief by some that the Native American mascot is inherently racist.

The mantle of NFL apparel manufacturer will soon pass from Reebok to Nike, which plans to begin a five-year stint as the exclusive provider by releasing new designs for all 32 teams on Tuesday, according to BleacherReport.com.

The sports blog listed the ‘Skins as one of the teams in most need of a retooling. The pictures originated from JockPost.com, and it is unclear if they are real or even affiliated with Nike. It also isn’t the first time these concepts have emerged.

This proposal for a new Redskins design moves away from the “Indian head” logo that first graced the helmet in 1972, and has since caused significant controversy from American Indian advocates. The players will bear throwback stripes on their biceps and calves, with plain white pants and a chief’s feather headdress design on their helmets and over their shoulder pads.

The modern approach to the new design is not dissimilar to the Maryland Terrapins, whose sponsor Under Armour unveiled new, very colorful jerseys before their 2011 season. Let’s hope this redesign works better for the Burgundy and Gold: the Terps went on to one of their worst seasons that year with a 2-10 record, 1-7 in the ACC.

What do you think of the redesign? Is this just what the Redskins need, or is it a superficial distraction?