WTOP is closely following a final flight of space shuttle Discovery. NASA\'s oldest and most traveled shuttle is headed Tuesday morning from Kennedy Space Center and to the Smithsonian\'s Udvar-Hazy Center in Virginia. Discovery was expected in the area between 10 a.m. and 11 a.m. but may be arriving a half hour earlier.
Listen now to WTOP News WTOP.com | Alexa | Google Home | WTOP App | 103.5 FM
(1/2) 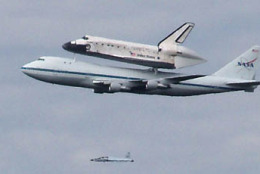 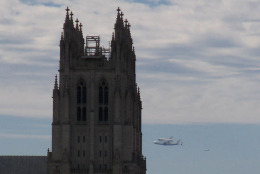 WASHINGTON – History will be made Tuesday as NASA’s oldest and most-traveled shuttle heads from the Kennedy Space Center to the Smithsonian’s Udvar-Hazy Center.

Aboard a modified jumbo jet, Discovery made its final takeoff.

Nearly 2,000 people – former shuttle workers, VIPs, tourists and journalists – gathered along the old shuttle landing strip to see Discovery off. A cheer went up as the plane taxied down the runway and soared into a clear sky.

The jet headed south over the beaches of Cape Canaveral before turning north. As it nears D.C., Discovery will fly approximately 1,500 feet above various parts of the D.C. metropolitan area. It will be seen over the monuments in the nation’s capital.

Check out this gallery from WTOP listeners and readers who saw over the D.C. metro area the shuttle themselves.

The exact route and timing of the flight depend on weather and operational constraints.

The Metropolitan Washington Airports Authority reports the shuttle is running about 30 minutes ahead of schedule. It was expected in the D.C. metro area between 10 a.m. and 11 a.m.

NASA TV was providing coverage of the Shuttle Discovery’s flight until noon. You can watch NASA TV below.

WTOP’s Kristi King is reporting live all morning from the Smithsonian Air and Space Museum annex in Chantilly, Va. Kristi will tweet from the Steven F. Udvar-Hazy Center. You also can follow NASA on Twitter @NASA.

WTOP would love to see your photos of the shuttle as it comes into the area. Tweet them using #wtopshuttle.

There are plenty of viewing spots around the area. The shuttle is expected to fly low over the region. Good viewing spots include along the Potomac River and at the Udvar-Hazy Center.

The shuttle will land at Dulles International Airport, but the impact to airport travel at Dulles is expected to be minimal.

The public gets the opportunity to see the shuttle up close at the Udvar-Hazy Center starting Friday.

Gov. Kemp faces next test from Trump loyalists in Georgia