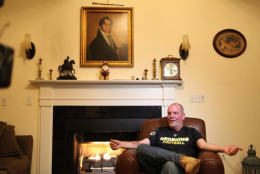 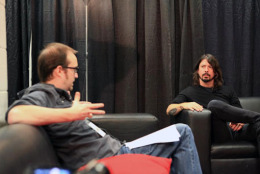 WASHINGTON – Most people remember fondly the music of their youth, and Scott Crawford is making a movie about it.

“It was terrifying at first since I was certainly youngest and smallest person there,” Crawford said.

Now he and director of photography Jim Saah are halfway through shooting a documentary on the scene from 1980 to 1990, called Salad Days: DC’s Punk Revolution, or whatever it ends up being called when it’s released.

The vibe of D.C.’s then-fledgling hardcore punk scene burned its ways into his senses.

“It smelled like sweat, and cigarettes, and beer, ya know, very macho. And yet, at the same time everyone was invited,” Crawford said.

At the time, Crawford edited a music fanzine called MetroZine, which he photocopied at his mother’s office on weekend. He also dabbled in record production.

As a teen, one of his friends was Dave Grohl, who went on to drum with Nirvana and now fronts Foo Fighters.

In clips from the film, Grohl doesn’t downplay the importance of Washington in his success.

“If it wasn’t for the D.C. hardcore scene, I don’t think I’d be a musician,” Grohl said.

Another stalwart of the early scene, Boyd Farrell, singer of Black Market Baby, remembers he never felt like he fit in, growing up in Prince George’s County.

“Then all of a sudden there were all these people, of the same mind, who were meeting down in D.C., and you just knew something was going to happen,” Farrell said in the film.

“Our reputation as crazy, drunken, redneck, punk rock image suited us. It wasn’t too far from the truth,” Farrell said.

“It was a drunken mess at some of those shows — the band and the crowd,” Crawford said.

Now, decades later, the irony of punks grown up is sweet for Crawford.

“Seeing Boyd as a grandfather, that was kind of cool. I think he’s the only grandfather I’ve interviewed so far for the film.”

Crawford hopes for a release next year.

Check out a little bit of the film: