Holidays: 'Enchant' shines with millions of lights in Nats Park | Where to see holiday lights | Send in photos of decorations | How to give greener this season
Home » College Football » Slain football players remembered…

CHARLOTTESVILLE, Va. (AP) — They were three college football players working through changes in their sports careers. Off the field, they were funny, sweet and ambitious.

Lavel Davis Jr., aspired to be the country’s best wide receiver after overcoming a season-ending injury. Gentle but passionate, the 6-foot-7 sports star set the standard among teammates for preparing for a game — even when the coaches weren’t around.

D’Sean Perry shifted seamlessly from linebacker to defensive end when the coaches asked. He was probably among the most interesting players on the roster, an art major who could draw and listened to classical music.

Devin Chandler transferred in from Wisconsin, where the wide receiver returned a total of four kicks, three against Notre Dame. At Virginia, his sense of humor helped teammates push through the monotony of training. He loved to dance.

The three University of Virginia juniors were returning from a class trip Sunday when authorities say they were killed by a fellow student and former football player.

Two other students were wounded, including another football player, Mike Hollins, who remained hospitalized Wednesday. The other student left the hospital Tuesday.

Even for a football player, Davis was big, towering over teammates and defenders alike. His size helped make him a freshman sensation for the Cavaliers.

A 90-yard touchdown reception — fingertip catch — against Abilene Christian was the highlight of his first season. By the time it was over, the soft-spoken kid from Dorchester, South Carolina, had established himself as a gamebreaker.

A torn ACL derailed his sophomore season — Davis watched from the sideline — but he returned this year with great expectations. They were realized in the very first game. Trailing Richmond 7-0, he caught a 56-yard pass that tied the score.

“He wanted to be recognized as the best receiver in the nation,” said Herman Moore, who developed a friendship with Davis as an alumni-mentor.

Davis’s major was undecided. And he had aspirations to play in the NFL, Moore said. But he was also thinking about life beyond sports, perhaps in business.

“He was very ambitious — confident both as an athlete but also as a student,” Moore said.

“He made a point to come up and shake my hand and told me I should call him Vel,” Hamilton tweeted.

“One thing that struck me about Vel was how much his classmates liked him and vice versa,” Hamilton wrote. “In my experience, star athletes often tend to hang out with other athletes (understandable, given the time commitment). But Vel seemed to go out of his way to make friends with non-athletes.”

Perry was the son of a prison guard and a mail carrier who had earned a full scholarship to the University of Virginia. He had plans to work toward a master’s degree and continue playing football.

“When anyone met D’Sean, the first thing they would see is this gentle giant with this humility, this absolute humility for an incredible athlete, incredible student,” said attorney Michael Haggard, whose son played with Perry at Gulliver Prep in suburban Miami.

That humility was on display in September when coaches at Virginia asked Perry to move from linebacker to defensive end.

Perry appeared in seven games this year and made seven tackles.

Zoe Tran, a friend and classmate, told WUSA9 that Perry was extremely sweet and much more than a football player.

“He was an amazing studio artist. He loved anime, loved to cook and was one of the most loyal people” Tran told the station.

Earl Sims, who coached Perry at Gulliver Prep, told reporters in Florida on Wednesday, that “D’Sean was a beautiful soul.”

Sims read aloud an essay Perry composed for an English class at Gulliver, with Perry writing that he had “an epiphany” while working with some middle school football players. One told Perry he wanted to be just like him.

“I realize that it is just not about me in the sense of what I want to do, but the people that helped me get to where I am right now and those ones who look up to me until this day,” Perry wrote.

He also noted: ”All I want to do is make my family and the city I am from proud.”

Chandler was a wide receiver from Huntersville, North Carolina. He recently transferred from Wisconsin, where his accomplishments included a 59-yard kickoff return and 18-yard rush in the Duke’s Mayo Bowl against Wake Forest in 2020.

Jim Leonhard, the University of Wisconsin’s interim head football coach, tweeted that Chandler’s personality “was infectious and he was a joy to be around.”

At Virginia, he was “the life of the party” — someone who kept everyone on the team entertained in places like the weight room, said Tony Elliott, his coach.

“He just was a big kid. Smiled all the time. Loved to dance. Loved to sing. Loved to compete, even though the guys revealed that he wasn’t very good at video games, but he thought he was,” Elliott told reporters Tuesday, laughing. “But he loved to compete.”

Ethan Johnson recalled how he spent a season playing with Chandler on their high school football team, with Johnson covering Chandler as a cornerback during practice. This past summer, the young men worked out together at their alma mater.

“And he was there telling me how much of a difference he saw in me. How much I had grown. How I had improved as a player,” said Johnson, who is now a freshman cornerback at Appalachian State. “That was the type of guy he was. He was always trying to lift people up.”

Hamilton, the American studies professor, recalled how Chandler transferred from Wisconsin and “made a point to come to my office hours repeatedly, often just to ask questions about how things worked around UVA.”

The professor later helped Chandler to declare his major in American studies.

“He was an unbelievably nice person, always a huge smile, really gregarious and funny,” Hamilton wrote. “One of those people who’s just impossible not to like.”

Hollins, a running back on the team who was shot in the back, was showing signs of improvement Tuesday after a second surgery.

Hollins was removed from a ventilator and was able to visit with family and friends in his hospital room, said Joe Gipson, the chief operating officer of a law firm in Baton Rouge, Louisiana, where Hollins’ mother, Brenda Hollins, works.

She told The Associated Press on Monday that, “Mike is a fighter — and he’s showing it.

“We have great doctors who have been working with him. And most importantly, we have God’s grace and God’s hands on him,” she said.

Elliott, his coach at Virginia, said Hollins “has a big personality.”

“I think he’s a young man that is fully invested in this institution, this program,” Elliott said. “He is a guy that I’ve seen really start to kind of come into his own from a leadership standpoint.”

In a statement released Wednesday, Brenda Hollins said the Chandler, Perry and Davis families “have not left our prayers since Sunday night.”

“Our hearts are broken for you, and we will continue to hold Devin, D’Sean and Lavel in our hearts,” she said. 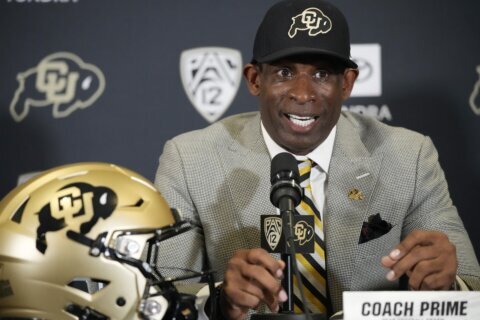