The second Saturday of October means that No. 6 Oklahoma and No. 21 Texas renew their longstanding rivalry at the Cotton Bowl.

While there will be Big 12 ramifications and potential playoff consequences depending on the outcome, the real story in Dallas (at least until the Longhorns can reach October unbeaten, something that hasn’t happened in a non-pandemic year since 2012) is the Texas State Fair and the food that is unleashed upon a more-than-willing public.

This year’s winners? I’ll start with “Pork Shots” from the Dallas restaurant Hans Mueller: “smoked sausage wrapped with hickory smoked bacon which forms a tiny bowl, filled with creamy mac and cheese”. And in the case of “one if by land, two if by sea” there’s the “Deep Fried Seafood Gumbo Balls” from Gourmet Royale. “Loaded with Gulf Coast shrimp, stewed chicken, blue crab meat, and andouille sausage. The balls are then rolled in our saltine cracker and breadcrumb batter, then fried, creating an explosion of flavor.” For those interested in a “healthier” option, check out the “Deep Fried PB & RazBrulee” (Hey! There has to be a fruit element in there somewhere) from Scrumbscious Burgers and Pieshakes (located in Forney, Texas). “A deep-fried peanut butter sandwich pocket is topped with a thick and creamy vanilla creme with a turbinado sugar heavy sprinkling and broiled and caramelized to a hard-shell top, then dolloped with mixed berries.”

Thank goodness that even when the Sooners and Longhorns leave for the SEC, the Red River Showdown and the food that comes with it at the Texas State Fair will continue.

Maryland (4-1, 1-1 Big Ten) at No. 7 Ohio State (4-1, 2-0), 12 p.m., FOX. Even though the game starts at noon, things could get late early in Columbus. The Terps are 0-6 against the Buckeyes and have allowed 49, 52 (twice), 62 (twice), and 73 points in those losses. The Buckeyes boast another wunderkind at quarterback in C.J. Stroud, who’s completing over 70% of his passes while averaging 10 yards per completion. Their top running back TreVeyon Henderson averages 9.4 yards per carry and 29 yards per reception. Maryland’s passing game is second in the Big Ten behind Ohio State, but quarterback Taulia Tagovailoa is coming off of a five-interception game against Iowa and won’t have top receiver Dontay Demus Jr. (knee injury) for the rest of the year.

Virginia (3-2, 1-2 ACC) vs Louisville (3-2, 1-1), 3 p.m., ACC Network. Both teams are coming off of one-possession games, with the Cardinals losing on a last-minute field goal to unbeaten Wake Forest while the Cavaliers beat underwhelming Miami thanks to a last-second missed field goal by the Hurricanes. Defense may very well be optional at Papa John’s Stadium as the UVa is last in the ACC against the run while Louisville is last against the pass and overall. Prepare to be wowed by both quarterbacks: Brennan Armstrong is averaging just under 400 yards passing per game while dual-threat Malik Cunningham has rushed for two touchdowns in every game this fall and rumbled for 197 yards and two scores last year in Charlottesville.

Kippy & Buffy’s definition of dual threat is properly pairing their tailgating wine with cheese, and in a salute to the students at the university they’re opening a textbook. The 2019 Textbook Merlot from Napa Valley offers up “intense aromas of ripe plum, mocha, and allspice marry with a generous mid-palate of rich flavors of black stone fruits and a balanced finish with full, extracted, almost sweet tannins.” While the wine and Havarti cheese with butter crackers travel well, they’re hopeful the defense travels as well.

Presto’s Pick: Cavaliers are too generous and come up short, 41-37.

Navy (2-2, 1-1 AAC) vs No. 24 SMU (5-0, 1-0), 3:30 p.m., CBS Sports Network. The Midshipmen are coming off of their best offensive showing of the season, but still needed to rally to beat UCF because of two fumbles inside their own 20 and a season-high eight penalties. They’ll be hard-pressed to contain the highest-scoring team in the AAC: the Mustangs lead the conference in passing behind Tanner Mordecai who’s completing 70% of his throws this fall. But before you get caught up in this 21st century air-attack, don’t think they’ve completely forgotten their “Pony Express” days of the 80’s as Ulysses Bentley IV averages 7.6 yards per carry. Can Tai Lavatai and the option offense keep pace?

Virginia Tech (3-1) vs No. 14 Notre Dame (4-1), 7:30 p.m., ACC Network. The Fighting Irish never led in last week’s loss to No. 7 Cincinnati, turning the ball over three times while committing seven penalties. The Hokies are coming off of a bye week after a less than stellar victory over Richmond. They’re also 15-9 against Power Five Conference teams at home under head coach Justin Fuente. And even thought the Irish aren’t technically in a conference for the one sport that generates interest and revenue towards the school they’ve played a limited schedule against ACC foes for the last decade, going 24-3 against the league since 2017. 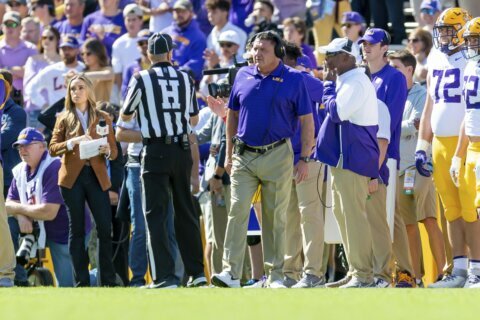