No. 25 Clemson hopes to avoid 2nd straight loss vs BC

Line: Clemson by 14 1/2, according to FanDuel Sportsbook.

Boston College WR Zay Flowers vs. Clemson’s secondary. Flowers is a 5-foot-10 junior who became the Eagles’ first all-ACC receiver in 2020 in eight seasons. He’s caught 18 passes for 275 yards in the Eagles hot start. Clemson is fourth in the ACC in pass defense, allowing just 177 yards a game.

Boston College: RB Patrick Garwo III is fourth in the ACC with 412 yards rushing and an average of almost 7 yards an attempt. Garwo had 175 yards and two touchdowns in the Eagles’ 41-34 overtime win against Missouri last week.

Clemson: QB D.J. Uiagalelei. The Tigers high-profile sophomore had a coming out party in a 34-28 win over BC last October, rallying his team from 18-points down in the second half playing for Trevor Lawrence, sidelined with COVID-19. Uiagalelei has looked less certain as the Tigers starter this season and will to pick up his play quickly for the offense to get moving.

Clemson has won the past 10 games with Boston College. The Eagles last victory came in 2010. … A quirk in scheduling brought on by COVID-19 last year has BC playing for the third straight season at Clemson. … The Eagles first-ever ACC road victory came at Clemson in 2005, a 16-13 overtime win with Matt Ryan at quarterback. … Clemson has lost three of its last five games, dating to its CFP loss to Ohio State last season. … Clemson has won 30 straight games at home, the nation’s longest active streak. 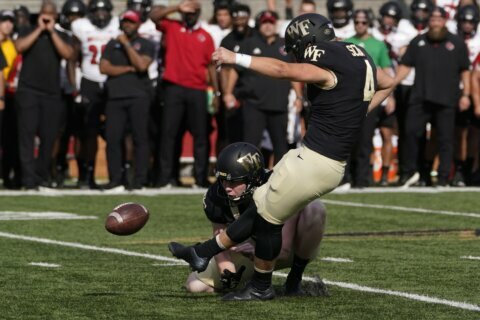