Halfway through the season, we not only start to trim the list of potential College Football Playoff participants but figure out exactly who the Heisman Trophy candidates are.
Listen now to WTOP News WTOP.com | Alexa | Google Home | WTOP App | 103.5 FM

Halfway through the season, we not only start to trim the list of potential College Football Playoff participants but figure out exactly who the Heisman Trophy candidates are.

Round up the usual suspects: Alabama quarterback Tua Tagovailoa was the runner-up last year, and this fall he is joined by his former backup/teammate Jalen Hurts who transferred to Oklahoma. LSU QB Joe Burrow has been lights out this fall after making a big splash in the Tigers’ win at Texas, and Ohio State’s Justin Fields has picked up where Dwayne Haskins left off. Wisconsin’s 24-23 loss at Illinois didn’t just torpedo the Badgers’ Big Ten West hopes; Jonathan Taylor’s Heisman candidacy takes a hit.

This should be no surprise; during this decade only one running back has won the award — can you name him? Yes, I had to look up Alabama’s Derrick Henry too. Tailbacks used to dominate the balloting, once enjoying a stretch where they won it 11 straight years. But the 21st century favors the passer, and since 2000, 16 of the 19 Heisman winners have been quarterbacks.

Not many are talking about the nation’s leading rusher Chuba Hubbard, who on name value alone is awesome, because even though the Oklahoma State running back has 1,265 yards and 15 touchdowns his Cowboys are 4-3. Boston College’s A.J. Dillon is second in FBS, but his Eagles are also 4-3. It’s a pitch and catch world, and the teams making playoff pushes can each air it out. Sorry, Earl Campbell.

Maryland (3-4, 1-3 Big Ten) came up short against Indiana 34-28. The Terps had a pair of chances to take the lead in the final four minutes, but turned the ball over on their final two possessions of the day. Likewise, the team had two chances to inch closer to bowl eligibility but winds up finding itself three steps shy with a remaining schedule that’s a combined 27-8.

Terrapin Troubles: the defense took a while to get in gear, allowing the Hoosiers to reach the end zone the first two times they had the ball. They also allowed backup quarterback Peyton Ramsey to come in and complete 20 of 27 passes. While penalties (six this week) were down, the two fourth quarter turnovers killed their comeback hopes. Ball security by Leake and decision-making by Pigrome need to improve.

Next: Saturday at noon at 7-0 Minnesota.

Virginia (5-2, 3-1 ACC) snapped a two-game losing streak by blasting Duke 48-14. After shutting down the Blue Devils in the first half, the offense scored the first four times they had the ball after intermission. When Duke did finally score, Joe Reed returned the kickoff back for a UVa touchdown. The season of possibilities is back as they once again stand alone atop the Coastal Division.

Cavalier Congrats: Bryce Perkins ran for three touchdowns while Wayne Taulapapa ran for 78 yards and a score. Joey Blount tallied 10 tackles and an interception while the defense held the Blue Devils to 2-14 on third down and secured five take-aways. Brian Delaney made both of his field goals while Reed continues to shine on special teams.

Cavalier Concerns: Perkins completed just 50% of his passes while tossing an interception. It was nice to see Chris Moore and Joey Blount finish 1-2 on the team in tackles, but one never likes to see the defensive backs making all the stops.

Virginia Tech (5-2, 2-2 ACC) needed six overtimes to get by North Carolina, finally prevailing in a 43-41 marathon. The win gives the Hokies a bit of a bounce entering their bye week, and the fact remains that they control the path to the ACC Championship Game.

Hokie Highlights: The quarterback carousel paid off, with Hendon Hooker completing 8-12 passes for 127 yards and a touchdown before going down with an injury. Ryan Willis stepped in to throw the go-ahead TD pass in the second quarter. Quincy Patterson II ran for 122 yards and a touchdown in the second half while also tossing a TD pass in overtime. Rayshard Ashby notched 17 tackles while Jarrod Hewitt added 2.5 sacks. Oscar Bradburn averaged 49.2 yards per punt.

Hokie Humblings: Brian Johnson missed 41 and 42 yard field goals that would have won the game. The defense coughed up 348 yards through the air. The offense lost two of their three fumbles on the afternoon. Turnovers all but torpedoed the season in September; they’ll have to keep the mistakes to a minimum if they want a November to remember.

Navy (5-1, 3-1 AAC) posted another dominant effort, crushing South Florida 35-3. The difference this fall has been a defense that is much more disruptive than previous units. The usual offensive efficiency saw Malcolm Perry join Keenan Reynolds, Napoleon McCallum and Chris McCoy as the only Mids to post 3,000 career yards rushing.

Midshipmen Medals: Perry rushed for 188 yards and two touchdowns while the team gains 434 yards on the ground. Diego Fagot notched 10 tackles as the defense tallied five sacks and kept the Bulls out of the end zone. Owen White averaged 47 yards per punt.

Midshipmen Miscues: Perry’s legs may be legendary, but his arm remains a work in progress after an 0-3 performance that included two interceptions. Six penalties for 45 yards isn’t a big deal at most schools, but it is at the Academy. 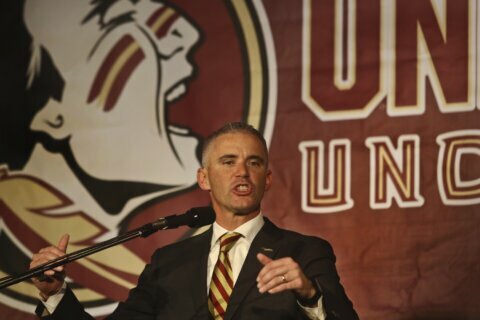 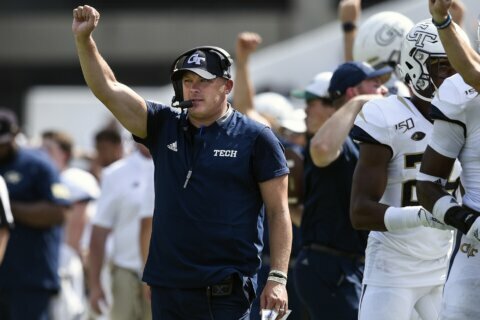 Georgia Tech athletes get day off to vote on Election Day