Want to fix the College Football Playoff? Expand it to 6 teams

A college football playoff that leaves out an undefeated conference champion is no way to decide a national championship. The solution is surprisingly easy.
Listen now to WTOP News WTOP.com | Alexa | Google Home | WTOP App | 103.5 FM

WASHINGTON — When the dust settles after a number of conference championships this weekend, we could very well have a 12-0 conference champion with a total undergraduate enrollment of more than 55,000 students left out of the College Football Playoff.

The team I’m talking about is the University of Central Florida, ranked No. 14 by the committee, behind Stanford, which has three losses. Because the Cardinal play in a Power 5 conference, they get the No. 12 ranking in the country. UCF takes on 20th-ranked Memphis this Saturday in the AAC title game, and if the Golden Knights win they’ll be included in one of the New Year’s Day bowls. They won’t be competing for a playoff spot or a national championship, though, despite doing everything they possibly could to get there.

It doesn’t have to be this way. Just take a page out of the NFL’s playbook and use their conference playoff format: Six teams, with the top two teams receiving byes. Now we can include a non-Power 5 undefeated school (if there is one), or add another team such as Alabama, who won’t play for their conference championship but has just one loss on the year, and still keep intact the sanctity of the importance of regular-season games by giving extra incentive to finishing first or second.

Imagine the six-team scenario applied to this weekend’s games. Let’s say No. 1 Clemson beats Miami in the ACC title game and No. 2 Auburn slips past Georgia for the second time in the SEC Championship. Those two teams would get byes. If one of them loses and No. 3 Oklahoma beats TCU in the Big 12 title game, the Sooners get a bye. Same thing for No. 4 Wisconsin — if Clemson and Auburn lose, and the Badgers stay undefeated, then they get a bye. That’s not too difficult.

No. 5 Alabama is in with this format. Like it or not, they’ve got just one loss in the toughest conference in terms of RPI. If No. 8 Ohio State wins, they’re in with a six-team playoff, and one-loss Wisconsin is the odd team out.

But in the current format, the Buckeyes could win the Big Ten Championship and simultaneously torpedo any Big Ten teams’ hopes of earning a bid into the playoff this year. Love or hate the Buckeyes, that doesn’t seem right either — if you look at the RPI for Conference rankings, the Big Ten trails only the SEC in terms of strength.

The No. 6 slot would go to the highest-ranked undefeated non-Power 5 school (if it exists). This year, that’s UCF. Without that possibility, half the conferences in FBS are never even in contention to play for the national title. If there’s no such team a given year, you can look at an independent such as Notre Dame if they’ve got one loss (or two losses to really good teams), or another Power 5 conference school can earn the slot. I don’t believe it should be a given that a non-Power 5 earns the final spot, but give ‘em a chance at least! If not, what are you really playing for? To win the Orange Bowl that people will probably forget about in five years?

Under this system, you can keep all of the non-College Playoff bowls in place (who doesn’t love waking up the day after Christmas and tuning into the Zaxby’s Heart of Dallas Bowl?). Then you rotate the Rose, Sugar, Fiesta and Orange between first- and second-round playoff games.

And just like the Super Bowl, you host the National Championship at a neutral site such as Miami, Los Angeles or Dallas, or even indoor stadiums further north, in Indianapolis or Detroit.

This isn’t complicated. We don’t need to try to jam five power-conference winners and Group of Five elites into four playoff spots. We can add two more spots and give the little guys a chance to compete for the National Championship (mind you, once again, that UCF has a student body more than quadruple that of Power Five TCU).

We made college football great again by finally creating a playoff system to determine who deserves to raise the grandest trophy of them all at the end of the year. Let’s make it better. 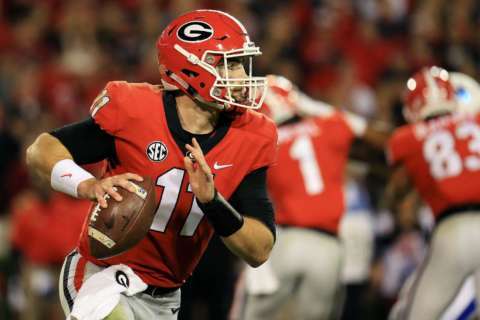 How the College Football Playoff selection will play out

Running back Keaontay Ingram transferring to USC from Texas