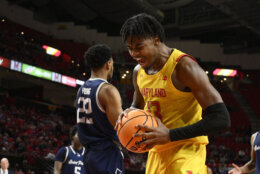 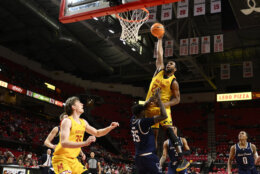 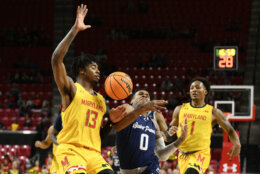 It was Maryland’s second game this season holding an opponent under 50 points after beating Niagara 71-49 in a season opener.

Saint Peter’s made just three of its opening 16 shots, including eight straight misses, and the Peacocks trailed 24-10 after turning it over nine times. Maryland led 35-19 at the break after shooting 50% and holding Saint Peter’s to 25%.

Patrick Emilien added 10 points for Maryland (9-3), which plays UMBC on Dec. 29 before restarting conference play against Michigan on Jan. 1. Julian Reese, averaging 11.2 points and 7.2 rebounds, did not play due to a shoulder injury. Hart, who scored 32 points in his first career start for Maryland against Saint Peters on Dec. 6, 2020, was 6 of 7 from the field.

Jahari Long sake a wide open 3-pointer from the corner to cap Maryland’s 13-0 run for a 31-point lead with 12:57 remaining. Maryland was 3 of 12 from distance in the first half but made 5 of 6 to start the second half.