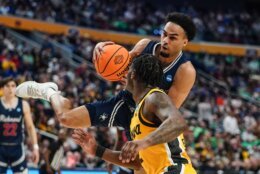 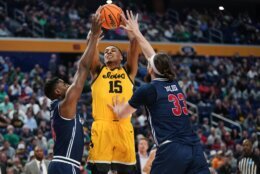 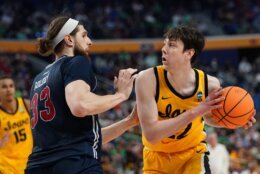 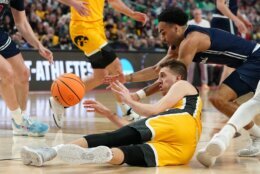 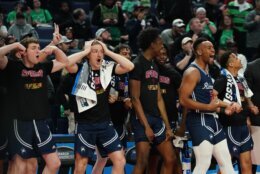 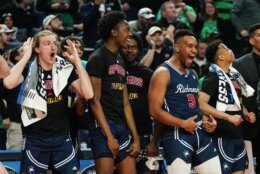 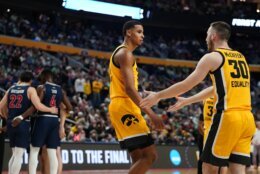 BUFFALO, N.Y. (AP) — Jacob Gilyard had an inkling a week ago — well before Richmond had even qualified for the NCAA Tournament — that the Spiders were capable of a first-round upset.

“Probably last Thursday,” the fifth-year guard said, referring to the day Richmond began a four-win run to the Atlantic 10 Tournament title. “We’re a fairly confident group and I think last weekend showed that.”

Spiders coach Chris Mooney had a feeling long before then, he said in the wake of the 12th-seeded Spiders’ 67-63 first-round win over Big Ten champion Iowa on Thursday.

Mooney reflected on how Richmond’s chances to qualify for the 2020 tournament with a 24-7 record were canceled because of the pandemic. Richmond went 14-9 last season, and Mooney credited the commitment six of his seniors showed when they chose to return for their extra year of COVID-19 eligibility.

“I told them it wasn’t going to be all perfect, like their careers haven’t been perfect. And I said, ‘The reason you came back was to handle adversity,’” Mooney said. “And these guys have done that in a great way all season.”

Gilyard scored 24 points, Tyler Burton added 18 points and 11 rebounds, and the Spiders improved their NCAA tourney record against fifth-seeded teams to 4-0. The Spiders (24-12) will face the Midwest Region’s No. 4 seed, Providence, which defeated South Dakota State.

Keegan Murray scored 21 points and Patrick McCaffery added 18 for the Hawkeyes (26-10), who were unable to carry over the momentum of winning four times in four days at the Big Ten tournament last weekend. Iowa set conference tournament records with 123 field goals and 351 points, finishing with a 75-66 win over Purdue on Sunday.

The Hawkeyes’ fourth-best offense nationally (83.8 points per game) was held to its third-lowest total of the year and worst production since a 48-46 loss at Rutgers on Jan. 19.

“This game is probably the worst game we played all year, and I don’t think it’s close so it’s definitely not a good feeling in our stomachs right now,” Connor McCaffery said.

Sixth-year Iowa guard Jordon Bohannon was unable to contain his emotions after playing his NCAA-record 179th and final game.

“Just thanks for giving me a chance. It’s been some of the best years of my life,” Bohannon said, his voice cracking on several occasions. “I faced a lot of adversity coming back, you know, a couple of hip surgeries, dealt with a lot of injuries. And I can honestly say this last year, I put my heart and soul into this team, and hopefully I left this jersey in a better place than where I found it.”

The Spiders are making their 10th tournament appearance and first since 2011, when they reached the Sweet 16 as — you guessed it — the No. 12 seed before losing to Kansas.

Led by sixth-year senior Grant Golden, Richmond’s 20-player roster is made up of five fifth-year graduate seniors — Gilyard is one of them — and three fourth-year seniors. That experience showed down the stretch, when Gilyard sealed the win by hitting all four of his free-throw attempts in the final 16 seconds.

The teams traded the lead seven times. Golden laid in an inbounds pass from Gilyard to put Richmond ahead 40-39 with 14:33 remaining, and the Spiders led the rest of the way. It was Golden’s first basket after missing his first nine attempts.

Iowa took issue with the lack of a call when Richmond’s Matt Grace appeared to foul Kris Murray on a 3-point attempt with about a minute remaining and the Spiders up 60-57. Grace was credited with a block on the play, but replays showed he hit Murray’s elbow. Nathan Cayo then completed a three-point play at the other end.

Iowa went 1 of 13 from 3-point range in a cold-shooting first half in which the teams combined to go 3 of 22; the Hawks finished 6 of 29 from beyond the arc. The first half featured six lead changes with neither team leading by more than four.

Iowa has had some rough experiences in the NCAA Tournament. The Hawkeyes, the fourth team to win four games in four days at the Big Ten tourney, were the No. 2 seed last year and had national player of the year Luka Garza but were eliminated by Oregon in the second round.

Richmond improved its tournament record to 9-9, with all the wins coming when the Spiders were seeded 12th or lower. In 1991, Richmond became the tournament’s first 15-seed to defeat a No. 2 seed with a 73-69 win over Syracuse.