South Carolina was the unanimous choice as the No. 1 team in The Associated Press women’s basketball poll released Tuesday after a dominant win over then-No. 2 UConn.

The Gamecocks won the inaugural Battle 4 Atlantis women’s championship on Monday in the 61st meeting between the top two teams in the AP poll. The AP decided to hold the poll one day so it would reflect the outcome of the game – only the second time since the poll began in 1976 that it has been delayed.

Buoyed by the victory, South Carolina garnered all 30 first-place votes from a national media panel after beating then-No. 9 Oregon and UConn on consecutive days.

“It gives us another top 10 win,” South Carolina coach Dawn Staley said of the UConn victory. “We said it before this game. Whether we win or lose, it can only help us.”

Maryland jumped one spot to No. 2 while the Huskies fell to third. The No. 2 ranking is the Terrapins’ best since Feb. 20, 2017. Indiana and North Carolina State were fourth and fifth again this week.

Baylor remained sixth after a tough three-point loss to Maryland. The Bears were followed by Stanford, Iowa, Arizona and Louisville to round out the top 10.

Maryland, Indiana. N.C. State and Stanford are all playing in a round-robin tournament in the Bahamas over Thanksgiving.

South Florida moved up four spots to No. 18 after a close loss to UConn and a win over Oregon in the Battle 4 Atlantis. The Bulls will stay in the Bahamas to play a game against Stanford on Friday.

Florida Gulf Coast entered the poll for the second consecutive year, coming in at No. 25. The Eagles were ranked 24th the final two weeks last season. Georgia Tech fell out after losing to Auburn.

Tennessee jumped up five places to No. 11 after impressive wins over South Florida and Texas. It’s the Vols’ best ranking since Dec. 31, 2018, when they were 10th. 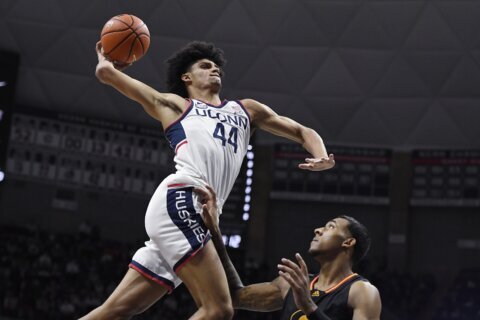