Alaysia Styles, who was averaging four points per game, scored 15 off the bench to lead a balanced attack and Maryland routed Northwestern 85-52 in the semifinals of the Big Ten women’s basketball tournament on Friday.
Listen now to WTOP News WTOP.com | Alexa | Google Home | WTOP App | 103.5 FM
(1/9) 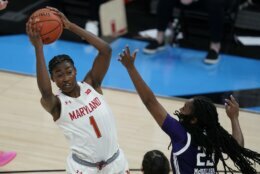 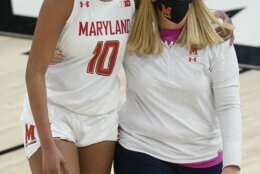 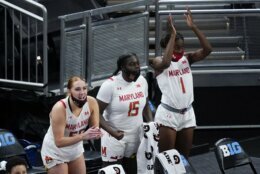 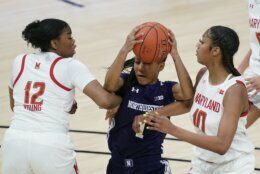 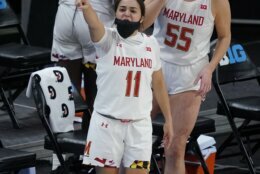 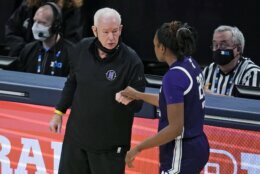 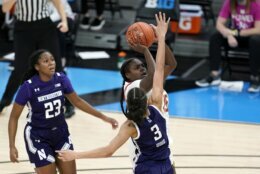 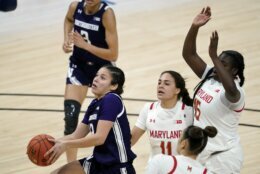 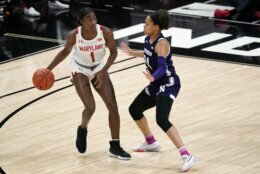 INDIANAPOLIS (AP) — No. 7 Maryland showed just how deep it is.

Alaysia Styles, who was averaging four points per game, scored 15 off the bench to lead a balanced attack and Maryland routed Northwestern 85-52 in the semifinals of the Big Ten women’s basketball tournament on Friday.

“We had a ton of fun,” Maryland coach Brenda Frese said. “You got to have depth to play three games in three days. We showed that with six players in double figures. This team is so unselfish. They make the right play for each other. Every player could put up a lot of points every night, but we are focused on winning.”

The top-seeded Terrapins (23-2) will face sixth-seeded Iowa — an 87-72 winner over seventh-seeded Michigan State in the second semifinal — in the championship game Saturday.

The Maryland bench held a 36-14 edge over Northwestern.

Styles, a transfer from California, hit all seven of her shots.

“Angel Reese was telling me, ‘I’ll get out of your way so you can drive,’ ” Styles said. “If they believe in me, then I believe in myself.”

Also cracking double figures for Maryland were Chloe Miller with 13 points, Ashley Owusu 12, and Faith Masonius 11. Mimi Collins and Angel Reese each had 10 points for the Terrapins and Reese had a team-high 11 rebounds.

Veronica Burton had 14 points and six assists for the Wildcats and Jordan Hamilton added 10 points. Burton, a junior, topped the 1,000-point mark during the game,

Maryland used a 22-2 run, including 18 unanswered points, in the last 6:33 of the second quarter to take a 49-24 halftime advantage. The Terrapins made 9 of 11 shots in the second quarter while the Wildcats were 3 of 13 from the field.

“We thought Northwestern would come in very inspired after beating Michigan and I think we matched that intensity,” Frese said. “I felt we punched first and never looked back.”

The game-changing spurt came with leading scorer Owusu on the bench for the entire period. Owusu returned to score seven points in the third quarter as Maryland expanded its lead to 70-38 after three quarters.

“We felt we owed it to them because we weren’t respected enough the first time,” Reese said. “Our defense led to offense.”

“We played hard against Illinois and Michigan, but the Michigan game was a physical game and I just felt we ran out of gas today,” he said.

Maryland is making its seventh consecutive appearance in the Big Ten Tournament championship game, the most consecutive by either men or women. Maryland, which has been in the final every year since joining the conference. is seeking its fifth title in those seven years.

“It starts with our focus,” Frese said. “It is an incredible accomplishment.”

“I was just having fun with my teammates,” she said. “I had fresh legs off the bench. I do what the team needs me to do, and today it was rebounding.”

Northwestern: After getting a boost for a better NCAA Tournament slot by beating No. 13 Michigan in Thursday’s quarterfinals, the Wildcats likely squandered that with the blowout loss.

Maryland: The Terps strengthened their bid for a No. 2 seed in the NCAA Tournament. A No. 1 seed is a possibility if they can win the Big Ten championship.