ANN ARBOR, Mich. (AP) — Hunter Dickinson gave Luka Garza fits around the basket, and Franz Wagner scored 21 points to lead No. 3 Michigan to a 79-57 victory over No. 9 Iowa on Thursday night.

The Wolverines (17-1, 12-1) passed yet another test against a highly ranked opponent, and they look increasingly alone atop the Big Ten, where every other team has at least four conference losses. Dickinson more than held his own against Garza in a much-anticipated matchup of two standout big men who have known each other for years.

SPOKANE, Wash. (AP) — Corey Kispert scored 25 points, Drew Timme had 16 of his 18 points in the second half and Gonzaga won its 50th straight at home, beating Santa Clara.

The Bulldogs won their 27th straight overall dating to last season, but struggled to shake the Broncos for most of the night.

Timme was a big reason why Gonzaga (23-0, 14-0 West Coast Conference) was finally able to pull away in the second half.

The Spartans (13-9, 7-9 Big Ten) rallied from a nine-point, second-half deficit with Gabe Brown finishing with 11 points and Josh Langford making key plays at both ends of the court.

The Buckeyes (18-6, 12-6) finished the game without coach Chris Holtmann, who was ejected for arguing with officials when he was called for a second technical foul with 1.4 seconds left.

Illinois (17-6, 13-4 Big Ten) played without star Ayo Dosunmu, who broke his nose Tuesday against Michigan State and is expected to miss at least two more games.

It was the most points for Miller since he scored 28 against North Carolina A&T in the Nov. 25 season opener.

Grimes scored 21 points in the first half, including 18 straight at one point. The junior guard finished 11 of 21 from the field, making 8 of 16 on 3-pointers.

Houston forced the Hilltoppers (15-5) into 20 turnovers, which they turned into 27 points.

Already the school’s career leader in assists, Wright and his speed gave the Trojans fits all evening. His 14 assists tied for the second-most in program history. The record is 15 by Jose Winston against Coppin State on Jan. 2, 2001.

Trey Pulliam matched his career-high with 18 for SDSU, which blew a 17-point second-half lead before recovering in overtime to take the inside track to repeat as Mountain West Conference regular-season champion.

SDSU (18-4, 12-3) took a half-game lead over BSU (18-5, 14-4), which had its four-game win streak snapped. On Tuesday, the Mountain West awarded San Diego State a pair of forfeit victories over New Mexico. Those games do not count in SDSU’s overall or formal conference record, but will count for seeding and conference championship implications. 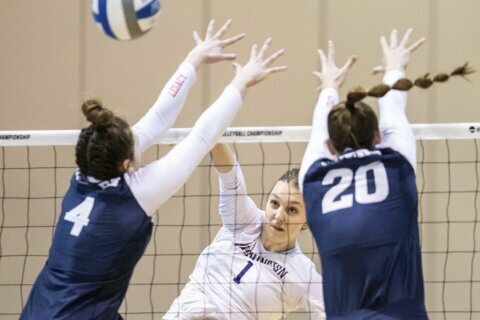