“I think we learned from that game. We were kind of in the same position,” Hauser said. “They had their run. Instead of folding and giving in, we responded with our own run.”

Jericole Hellems poured in 23 points before fouling out for N.C. State (7-7, 3-6), which won just one game in January.

Virginia coach Tony Bennett questioned his team’s toughness after the weekend setback. They Cavaliers heard that.

“I just took it personally,” Murphy said. “(I told myself) I’m going to make sure I don’t give him a reason to call me soft. We just knew we had to come out and really fight this game.”

Virginia players were intent on being more aggressive.

“You never want your coach to call you soft,” Hauser said. “We’re still getting better in that area and that showed tonight.”

Hellems’ jumper gave the Wolfpack a 46-45 lead with less than 6 1/2 minutes remaining as Virginia endured an eight-minute span without a field goal.

Hauser hit a 3-pointer to break the drought, allowing the Cavaliers to build a 50-46 edge with 5:38 to play. Huff converted a three-point play to stretch the lead to 55-48.

“I was proud of these guys for their fight,” N.C. State coach Kevin Keatts said. “I think this team has learned a lot about themselves these last couple games.”

Hauser scored 11 points in the first 10 minutes, pushing Virginia to a 19-13 advantage.

Five minutes later, Hellems reached the 14-point mark and the Wolfpack led 22-19, aided by the Cavaliers’ 6 1/2-minute scoring drought. Virginia scored the next nine points and led 28-24 at the break.

Virginia won its seventh straight road game in the series.

Virginia: While the ACC-leading Cavaliers had trouble scoring from the field at times, they made 20 of 22 free throws (90.9%). They entered the week third nationally in free-throw shooting at 80.4%.

“That’s important,” Bennett said. “It’s good to see we got a few more (attempts by) driving.”

Virginia had attempted only 24 foul shots in the previous four games combined.

“He’s getting what he’s earned,” teammate Braxton Beverly said of Hellems. “I couldn’t be any more proud of him for what he’s doing, the way he’s stepping up. He’s been a huge lift for us.”

All of Virginia’s scoring came from its starters. Four substitutes played, going a combined 0-for-4 from the field and collecting one rebound, one assist and one steal.

Each of the Virginia starters played at least 33 minutes, with Hauser logging a team-high 38 minutes.

“We had to ride them and go with them,” Bennett said. “We had to use our timeouts to the best of our ability.”

“That doesn’t mean the bench won’t help at times,” he said.

N.C. State forward D.J. Funderburk, who was held out of Sunday night’s loss at Syracuse because of “university policies,” was back in action. He entered about five minutes into the game, finishing with nine points — all in the second half. He scored a team-high 14 points in last season’s win at Virginia.

N.C. State will travel to Virginia for a rematch in three weeks. The Feb. 24 pairing was announced earlier Wednesday amid several schedule adjustments within the ACC. The teams were slated to meet Jan. 20, but that game was postponed because of N.C. State’s coronavirus protocols.

Virginia: Hosts Pittsburgh on Saturday, a matchup announced earlier Wednesday after the Louisville-Virginia game was nixed because of Louisville’s coronavirus issues. 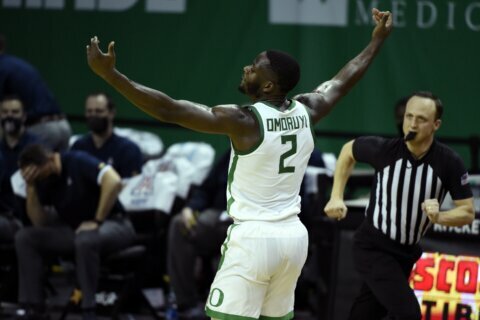