LOUISVILLE, Ky. (AP) — Louisville coach Jeff Walz and the Cardinals players are embracing the challenges that come with their lofty new status as the team to beat in women’s college basketball.

The Cardinals (12-0, 5-0 Atlantic Coast Conference) have been a team-to-beat for a while under Walz. They believe the cohesion that has carried them to an unbeaten start to the season through pandemic-related pauses and postponements has them prepared to be No. 1.

“I really don’t expect much to change,” said the 14th-year coach, whose team began the season No. 5 and spent the past six weeks at No. 2 before moving up in Monday’s Associated Press Top 25.

“We have some very talented players, there’s no question about it. (But) we’re not just going to step on the floor and just overwhelm you and work its way back. So, I don’t think anything’s going to change. I’d be shocked if it did.”

Not surprisingly, Louisville’s catalyst is senior guard Dana Evans, a preseason AP All-American and ACC player of the year averaging 19.4 points and 4.4 assists per game. But many others have stepped up to not only fill voids left by the departures of three other starters, but provide depth on both ends of the floor.

Forwards Olivia Cochran and Hailey Van Lith, both freshmen, each average at least 12 points and are 1-2 on the team in rebounding with six-plus per game. Junior guard Kianna Smith, a perimeter threat who scored 600 points in two season at Cal, is averaging 13.3 points after sitting out last season per NCAA transfer rules.

Louisville has shot better than 50% from the field the past two games with five players scoring in double figures both times.

“I feel like anyone that comes on the floor can score and can make a play and that just makes the game fun,” Smith said. “It’s so much fun to see my teammates be successful and also be happy for me when I succeed.”

The Cardinals collectively put points on the scoreboard by finding open teammates when Evans has a rare off night. The Cardinals had 22 assists on 32 baskets in Sunday’s 84-56 home rout of Florida State, including eight assists by Evans.

“We all know we can score at three different levels,” Evans said, “but finding each other and getting each other open shots is what’s most important. And if we can continue to do that and move the ball the way we did, it’s going to be hard to guard us.”

Walz warned there will be games where the shots don’t fall as often and that teams will have extra motivation now that the Cardinals sit atop the rankings.

Louisville will host No. 23 Syracuse (7-1, 4-1) Thursday night, and February features a home matchup against unbeaten and second-ranked North Carolina State.

Walz is trying to keep Louisville’s No. 1 ranking in perspective but wants the Cardinals to appreciate the program’s ascent to its lofty perch.

While the view may be a little different for the Cardinals, winning is not new for Louisville.

The Cardinals have reached two NCAA championship games, three Final Fours and produced a series of All-Americans under Walz. But this is a first for the program.

“It’s a credit to what these young women have done this year,” Walz said. “Especially with everything that’s gone on, the focus that they’ve been able to maintain. But I think it is also a credit to all of our players for what we’ve been able to establish here. It’s a great honor, there’s no question about that.” 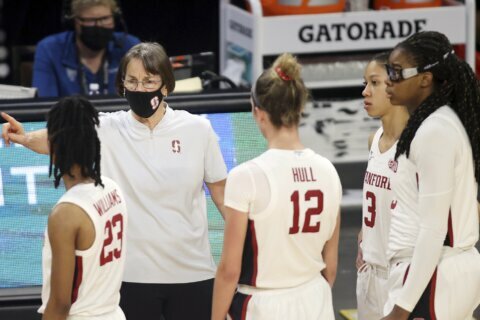