Is offshore wind development a threat to whales? Here’s what to know.

In less than two months, seven dead whales have washed up on the shores of New Jersey and New York. What’s behind the mortalities has not been clearly established, but theories abound. Some have pointed blame at offshore wind development in the region and claimed construction of the sites causes harm to marine animals. But federal officials are pushing back, saying that’s not what the evidence shows.

Here’s what we know about the recent whale deaths and what researchers say could be the cause.

What happened to the whales?

Several dead whales have washed up on New Jersey and New York beaches since the beginning of December. Two were found in New York, with a 31-foot-long humpback whale washing up in Amagansett, on Long Island, on Dec. 6, and a 30-foot-long sperm whale found on Rockaway Beach on Dec. 12. The others have been found in New Jersey, including a 12-foot infant sperm whale in Keansburg on Dec. 5, a 30-foot humpback on Strathmere beach on Dec. 10, a humpback whale in Atlantic City on Dec. 23, and another 30-foot humpback whale in Atlantic City on Jan. 7.

The most recent was on Jan. 12, when a 32-foot-long humpback whale washed up in Brigantine, New Jersey. 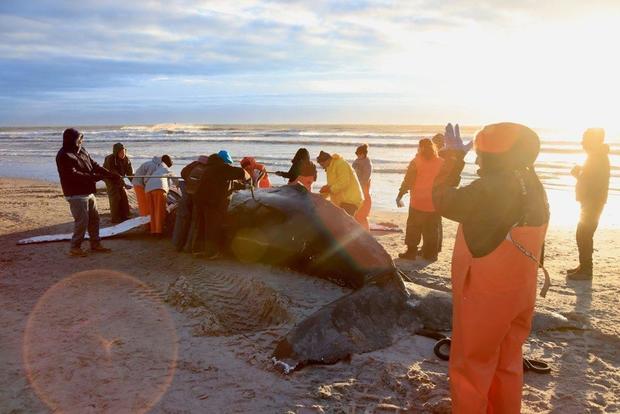 A dead female humpback whale more than 32 feet long washed up on the shore of Brigantine, New Jersey, in January 2023.

The causes of death for these whales have not officially been confirmed, as it can take several months to obtain results of test sampling. But some of the cases did reveal information about what may have contributed.

The most recent whale, for example, may have been killed from a vessel strike after responders observed evidence of blunt trauma to the whale’s head and thoracic area, according to the Marine Mammal Stranding Center. Likewise, the whale found on Dec. 7 was also found with “marks from a suspected ship strike” near its blowhole and on the whale’s right side. In that case, responders also found a large hematoma — a pool of blood — under one of the suspected strike marks, and also found scars from a possible entanglement.

Why are some blaming wind energy?

Even though pathology results have not yet been released, some local groups have accused offshore wind energy development in the region of being responsible for the deaths.

The increase in offshore wind energy development comes amid the White House’s goal to ramp up offshore energy capacity to 30 gigawatts by 2030 — an amount the administration says could provide power to more than 10 million Americans’ homes for a year.

On Jan. 9, a local group called Clean Ocean Action issued a press release demanding “an immediate and fully transparent investigation” into the whale deaths, a “hard stop” on existing offshore wind energy development activities, and a pause to any “new, planned, or pending” development permitting activities.

“These tragic multiple deaths of mostly young, endangered whales are of no apparent cause, however, the only new activity in the ocean is the unprecedented concurrent industrial activity by over 11 companies in the region’s ocean, which allows the harassment and harm of tens of thousands of marine mammals,” Cindy Zipf, executive director of the organization, said in the release.

Clean Ocean Action accuses the National Oceanic and Atmospheric Administration of giving “the green light” for offshore wind companies to “harm, harass, injure and kill” marine mammals in their development process through Incidental Take Authorizations. The ITAs issued by NOAA may allow the unintentional harassment, injury or killing of marine mammals in connection to authorized activities, “including construction projects, scientific research projects, oil and gas development, and military exercises.”

But during a call with reporters on Wednesday, NOAA officials reiterated that the agency “has not authorized — or proposed to authorize — mortality or serious injury of whales for any wind-related action.” It also said “no whale mortality has been attributed to offshore wind activity.”

According to NOAA, there are 12 active authorizations for “Level B” harassment from offshore wind sites in the Atlantic Ocean from New England to the Carolinas, meaning that companies will likely disturb animals, but do not have permission to injure or kill. There are also two active authorizations that allow non-serious injury, specifically auditory injury, from “exposure to noise from pile driving.”

Benjamin Laws, NOAA Fisheries deputy chief for the permits and conservation division, told reporters that “no injury, and certainly no mortality,” has been authorized.

Laws said that most of the offshore activity right now is surveys for more developments. During a vessel-based survey, a piece of equipment that emits sound is paired with a receiver and towed through the water in a zig-zag fashion to track how sound waves bounce off the sea floor.

Laws said that the agency did not have “evidence that would support the connection between the survey work and these recent stranding events or any stranding events in the last several years.”

The agency added that when surveys are done, vessels are required to slow their speed and must be joined by protected species observers at all times, with at least one observer during the day and at least two during the night with night vision devices.

NOAA has acknowledged that any activity that puts noise in the ocean could potentially impact marine mammals, namely their navigation, habitats and vessel traffic. However, there is no evidence that’s what happened in the most recent cases of whale strandings, the agency said.

If development isn’t responsible for recent whale deaths, what is?

One of the most important aspects of the string of whale deaths to note is that humpback whales, which have made up a majority of the recent events, have been undergoing an unusual mortality event since 2016. Since then, there have been roughly 178 deaths, most of which occurred in Massachusetts and New York. Necropsies have been done on at least half of those whales, of which about 40% had evidence of either a ship strike or entanglement. More research on the cause of the event as a whole is needed.

Both humpback and sperm whales, the two species seen washing up on shores, are listed as endangered, according to NOAA. Human interaction remains the species’ No. 1 threat, namely from vessel strikes, entanglements, noise pollution and marine debris.

Sarah Wilkin, coordinator of the Marine Mammal Health and Stranding Response Program, said Wednesday that humpback whale strandings in particular tend to happen in the mid-Atlantic during winter. Researchers are still working on determining if the recent strandings is an elevated number compared to previous years, she said.

Climate change is also anticipated to have a major impact on the whales, as changes in the ocean can impact their habitat and food availability. Sperm whales are expected to be more resilient to these changes, as they have a more widespread presence worldwide. 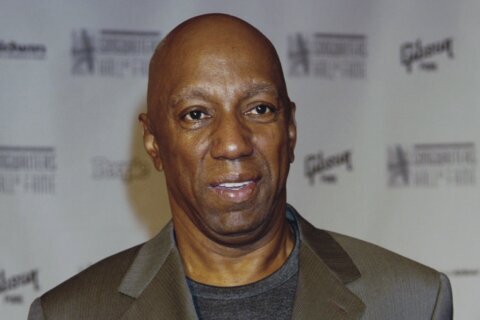