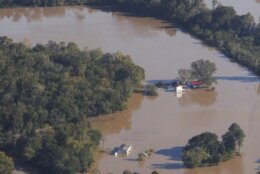 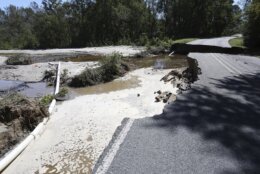 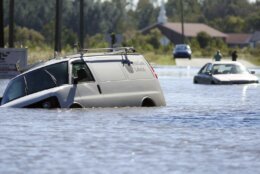 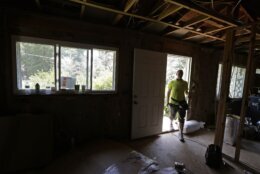 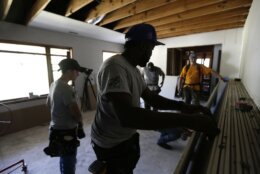 RALEIGH, N.C. (AP) — Nearly six years after flood damage from Hurricane Matthew displaced Thad Artis from his home in Goldsboro, North Carolina, he has still not been placed in permanent housing.

Living alone in a motel for the past two years, growing increasingly frustrated with what he considers empty promises of swift action from government officials, the 68-year-old spends every penny on his wife’s health care after a stroke left her unable to walk.

Before he moved his wife into an assisted living facility, the two lived in their decaying house, roughly an hour southeast of Raleigh by car, for several years after the storm — both developing respiratory illnesses as mold spores grew in the ceiling and bird droppings spattered atop their leaking roof. Roaches and “other creepy crawlies” inhabited the kitchen floorboards. The back of the house was so rotten, Artis said, that the washroom was about to fall through the floor.

“We stayed sick for a year,” he said in an interview. “The house and all the furniture, it’s gone, it’s rotten. We ain’t got nothing. I take everything I can get right down the road to see her, to take care of her. I don’t give up because I got to help my wife.”

Waiting on an unfinished modular home in nearby Pikeville, Artis is among hundreds of low-income homeowners enrolled with the North Carolina Office of Recovery and Resiliency who are living in temporary accommodations years after the 2016 storm and Hurricane Florence in 2018.

A bipartisan General Assembly committee tasked with investigating these delays in disaster relief held its first meeting Wednesday — the four-year anniversary of when Florence made landfall in North Carolina.

Co-chair Rep. John Bell, a Wayne County Republican whose district along the Neuse River incurred some of the worst flood damage statewide, said he’s seeking accountability on behalf of displaced constituents like Artis.

“We had to deal with multiple hurricanes, tropical storms and a pandemic, but those are the realities, not the excuse,” Bell said in an interview. “We’ve been back and forth on this issue for years now. We’ve made some headway, and then we take a step backwards and then politics gets thrown into it. It never should’ve gotten to this point.”

Laura Hogshead, the recovery agency’s director, said in an interview that complications brought on by COVID-19, compounded by rising prices and high demand for contractors, have slowed efforts to make homeowners whole.

Construction holdups have left some funding recipients like Artis in short-term lodging for months or even longer. Hogshead said that is partially the result of two manufactured housing vendors pulling out of contracts with the state in 2021 and 2022 as unit prices soared.

Co-chair Sen. Brent Jackson, a Sampson County Republican, questioned whether NCORR will even be able to complete the projects it started before time runs out. Under a government mandate, federal funds allocated for the recovery must be spent by June 2026.

“Now we’re in a hole so deep that, quite frankly, I don’t think you or your staff can dig yourself out of it,” Jackson said, instructing Hogshead to return in about three months with significant progress updates.

North Carolina’s legislature created NCORR in 2018, in part to distribute what became $778 million in federal recovery funds awarded by the U.S. Department of Housing and Urban Development for Matthew in 2017 and Florence in 2020.

The agency, under Democratic Gov. Roy Cooper’s control, has committed more than 60% of these funds to support homeowners, with about $231 million actually spent so far.

Funds are used to make major repairs or replace homes owned by low-income families in counties battered by both storms. They also support affordable and public housing projects that are less susceptible to flooding.

Homeowners must navigate an eight-step process designed to ensure they qualify for these funds and haven’t already received similar disaster money. It includes an environmental review of their damaged property, followed by a grant award, contractor selection and construction.

Of the nearly 4,200 Homeowner Recovery Applicants since Matthew money arrived, nearly 800 projects are completed, according to NCORR. But Hogshead said additional applicants — now more than 1,100 — are either waiting to find a contractor willing to take on a government-funded project with its additional paperwork, or for the contractor to begin work.

“I don’t care how many (contractors) you have,” Sen. Jim Perry, a Lenoir County Republican, told Hogshead at the meeting. “I did notice that you said you’ve had a consistent number. Well, we’ve had pretty consistently bad results.”

As of Tuesday, 294 applicants currently waiting for repairs or a replacement manufactured home were living in temporary accommodations — often a rental property or hotel.

Shiletha Smith, 68, has inhabited her damaged home in Fremont — a five-minute drive north of Pikeville — since Hurricane Matthew flooded the property in 2016, wiping out her insulation, destroying the central air conditioning unit and damaging the roof. This week, Smith said in an interview, she is finally moving into a hotel so construction can begin.

“Finally, after two years of waiting, they’re supposed to start construction on my home,” Smith said. “I almost got flooded out of my house and had to repair the whole side of my house that was from the water damage.”

Smith described the relief application process as “extremely frustrating” and said her award determination was so minimal, she felt like she had no choice but to appeal, further delaying repairs.

With another hurricane season in full swing, Hogshead said she’s always checking the tropics for developing storms that could cause further damage or delays.

“The thing I really worry about is another storm,” she said. “Upsetting this apple cart in the middle of construction is the X-factor that none of us can control.”