Against a backdrop of so much concern that democracy is under threat, Americans also see a rising potential for political violence: almost two-thirds think the coming years will bring an increase.
Listen now to WTOP News WTOP.com | Alexa | Google Home | WTOP App | 103.5 FM

Against a backdrop of so much concern that democracy is under threat, Americans also see a rising potential for political violence: almost two-thirds think the coming years will bring an increase. And the percentage holding that view has itself been rising even higher, compared to 2021. 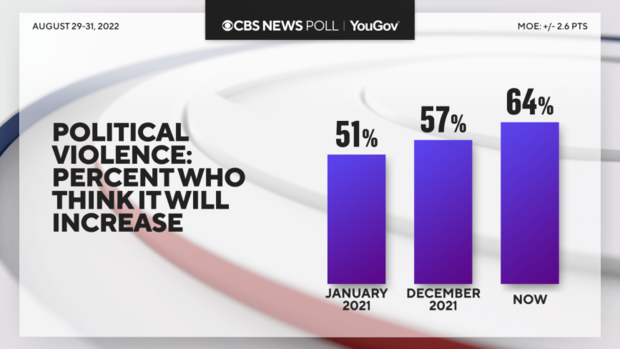 The prospect of violence is tied in part to a perception of widening divisions: a whopping 80% of Americans believe the U.S. is more divided now than it was during their parents’ generation. (And here, older Americans are even more likely to say this, and their parents’ generation would have lived through the upheaval of the ’60s.) Just as many say tone and civility have gotten worse.

Then, when they look forward, a majority believe that a generation from now the U.S. will be less of a democracy than it is today. 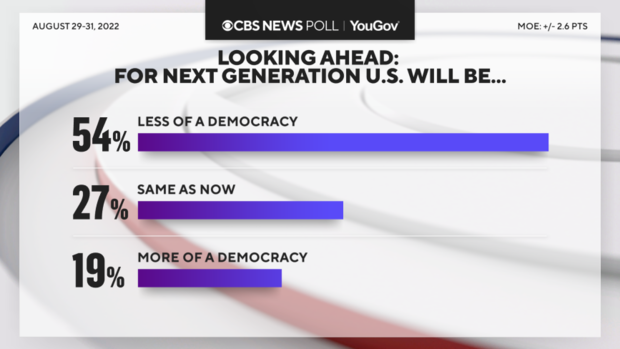 Examining so-called division and polarization can be done many ways, of course. One is to posit that democracy is in part about rights: who has them and to what extent. And in asking about the status of rights in America today, we reveal one stark illustration of fundamental differences between partisans.

In either case, neither set of partisans thinks the balance is proper today. 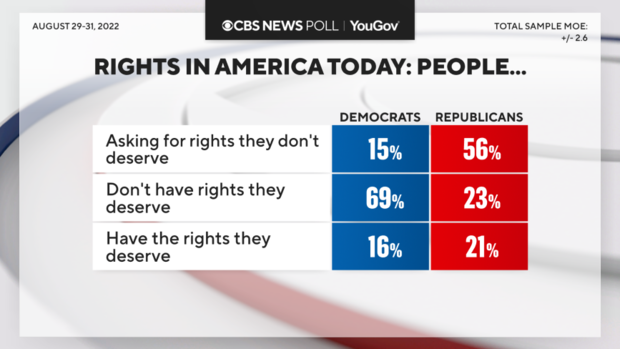 Another way to measure is to look at how partisans see each other today, whether that is as political opponents — and therefore as people who could presumably work out differences through a system — or as enemies, posing an existential threat who cannot. 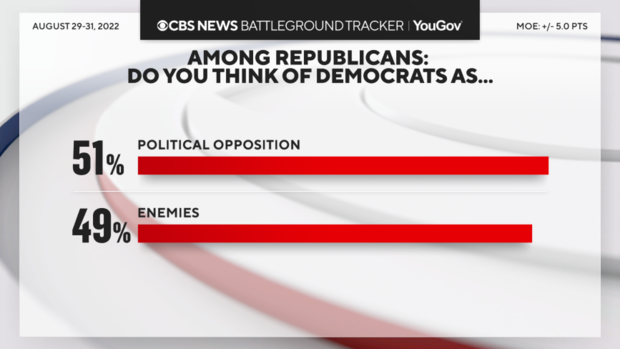 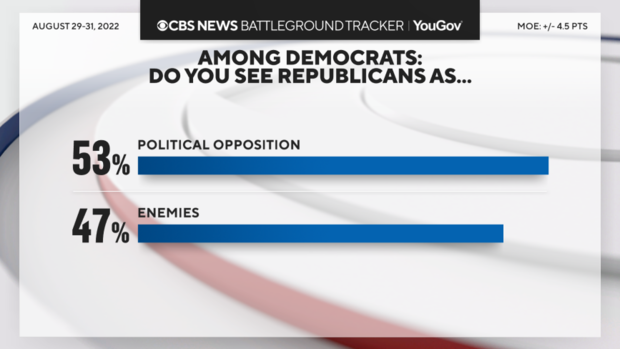 So what’s next? There isn’t a lot of optimism right now, with just a third saying they’re optimistic Americans can come together and work out their differences — however, here younger people are much more optimistic than their elders.

Would more diversity of groups represented in elected office make politics better? While no single group or answer elicited a majority overall, the top response was having more young people in elected office, followed closely by having more women in office; women, especially, thought this would help.

And we note that Americans widely decry the idea of violence: 86% say violence is always unacceptable, and there’s no difference on this between parties or ideologies.

Most people still want unity, in this sense: there is not a lot of support for the (perhaps unrealistic) idea of dividing the country into two nations of “red” states and “blue” ones.

Opposition comes from a majority of both Democrats and Republicans, conservatives and liberals, though comparatively more Democrats are strongly opposed to the idea of splitting up. 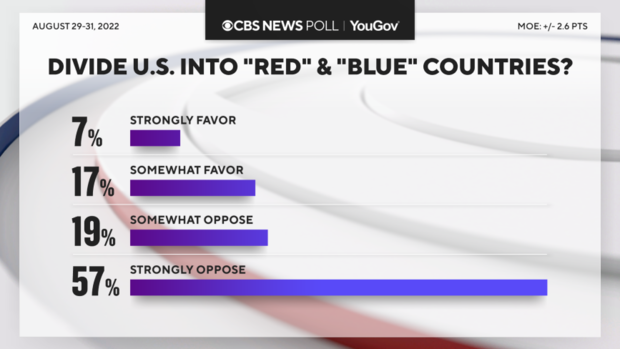 This CBS News/YouGov survey was conducted with a nationally representative sample of 2,085 U.S. adult residents interviewed between Aug. 29-31, 2022. The sample was weighted according to gender, age, race, and education based on the U.S. Census American Community Survey and Current Population Survey, as well as to 2020 presidential vote. The margin of error is ±2.6 points.