John Hinckley Jr., the man who attempted to assassinate President Ronald Reagan 41 years ago, spoke exclusively with CBS News about the heinous crime, the decades he spent under mental health supervision and his life now.

A judge granted Hinckley unconditional freedom earlier this month. His confinement conditions have been gradually eased since his 2016 conditional release from a psychiatric institution.

“I have true remorse for what I did. I know [the victims] probably can’t forgive me now, but I just want them to know that I am sorry for what I did,” Hinckley told CBS News’ chief Washington correspondent Major Garrett. He is the only person to have shot a U.S. president who was ever freed.

On March 30, 1981, Hinckley, then 25, brought a .22 caliber revolver to the Washington Hilton, where President Reagan was addressing union members. As the president walked to his limousine, Hinckley fired six shots, striking Reagan in the chest.

Hinckley was judged mentally unfit to stand trial and spent more than 30 years at St. Elizabeths Hospital in Washington, D.C. 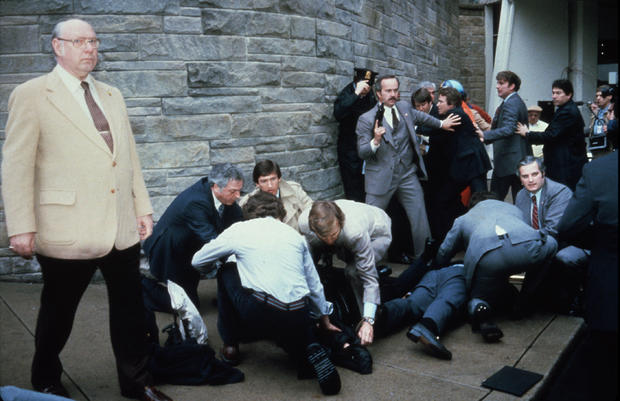 Chaos surrounds shooting victims immediately after the assassination attempt on President Ronald Reagan on March 30, 1981, by John Hinckley Jr. outside the Hilton Hotel in Washington, D.C.

“I’ve been the most scrutinized person in the entire mental health system for 41 years,” he said.

“One was a hanging, and one was an overdose of pills,” he said.

Hinckley still takes two psychotropic drugs and credits decades of individual and group therapies with enabling him to reintegrate into society.

“Psychologically, that person is dead,” Hinckley said of his younger self. “I’m a completely different person in mind and spirit.”

Hinckley told CBS News delusions and severe depression left him isolated and divorced from reality in the early eighties. “I was not just a cold, calculating criminal in 1981,” he said. “I’m glad I did not succeed.”

In 1981, Hinckley read in the newspaper that Reagan would be at the hotel that day and, motivated by a delusional obsession to try to impress actress Jodie Foster, decided to try to kill the president.

“It was planned, yeah,” Hinckley told CBS News, adding that he believes Reagan was a “nice man and a good president.”

Hinckley said he has no recollection of what it felt like to pull the trigger. “It’s such another lifetime ago…it’s something I don’t want to remember. It was all just so traumatic.”

Reagan was rushed to George Washington University Hospital, where doctors later said a round from Hinckley’s gun lodged an inch from the president’s heart.

Hinckley, now 67, lives in Williamsburg, Va. He is a prayerful Christian, believes there are too many guns in America and says he’s worried about the future of the U.S.

“I think the climate of the country right now is just not good at all.” he said, citing big-city violent crime.

With his newly granted freedom, Hinckley would like a career as a touring singer/songwriter, but three scheduled performances have been canceled because of security concerns.

“I don’t know anybody else who’s certainly had a life like I’ve had,” Hinckley said. “I mean, what I tell people now, if you want to get to know John Hinckley, listen to his songs.”