In the ruins of Mayfield, a search for hope in what’s saved

WINGO, Ky. (AP) — She arrived at the shelter sobbing. Her house was gone, along with everything in it. On the phone, Victoria Byerly-Zuck begged her neighbors to search the wreckage for the one thing she could not bear to lose.

It was a plexiglass box, about the size of a medicine cabinet, and inside was all she has left of her infant son who died four years ago: his cremated ashes, his photos, the first and only outfit he ever wore.

The 35-year-old was surrounded at this makeshift shelter by others who lost everything when a deadly tornado tore apart their small town of Mayfield. Their downtown was demolished. Hundreds of houses were reduced to rubble. They lost cars, wallets, clothes, Christmas presents, all their furniture, photos and priceless family heirlooms.

More than 100 survivors are here, at a church in the nearby town of Wingo, population 600, that opened its doors in the hours after the tornado touched down and now no one knows how long it will have to remain open. One 82-year-old widow with no home to go to asked volunteers how long she could stay, and they told her as long as she needed to.

Byerly-Zuck’s 3-year-old son spent a day trying to climb into any car that came and went from this shelter.

“He wants to go home,” she said. He has autism and is nonverbal. She doesn’t know how to make him understand they don’t have one anymore.

They’d been alone at their rented house in downtown Mayfield when the storm roared in. She piled pillows in the bathtub and laid him on top of them. As the windows burst, she grabbed the essentials for her son: a bag of diapers, some wipes, a few changes of clothes, a gallon of milk. It did not occur to her that those hastily selected items would be all they’d have left.

She got back to the bathroom and closed the door just as a tree uprooted and fell into the house, feet from where they cowered. She climbed onto the edge of the tub, trying to balance her body to shield her son without crushing him beneath her.

She prayed to God to save him: “Please let us make it through this. I don’t care about anything else. Everything else is replaceable, but he is not replaceable.”

She’d buried a baby before, and all she could think was that she could not do it again. In 2017, she was pregnant, learned she was carrying a boy and picked a name. The very next day, her water broke and the doctors couldn’t save him. He was born premature at 22 weeks, and his lungs weren’t developed. He gasped for breath once and died moments later. She lives in that moment every day in her mind.

“I can’t live through it again. I really can’t. I just got my one son now,” she said.

As he lay in the bathtub while the storm passed, she realized they were trapped. The fallen tree and debris had blocked the bathroom door. Crying and choking, she couldn’t scream for help. She smashed a hole through the drywall, and turned the flashlight on and off to signal that someone was inside. The National Guard came and dug them out.

That very morning, she’d wrapped her son’s last Christmas present — $300 worth of gifts she’d bought for him. As they fled their ruined home, the only things standing were the bathroom where they’d been and one other room — all those presents were under the rubble.

A neighbor called her later that night to tell her the rest of the house crumbled, and she begged them to search for the box with her baby’s ashes.

Now they’re surrounded by rows of cots and people who had been strangers. They play together on the pool table in the corner that the church set up for now-homeless kids. There are people here in their 80s and 90s, babies, dogs, including a little one named Jingles.

On Monday afternoon, volunteers scrambled to set up more cots because they expected to absorb 40 more people from other shelters that sprung up in the hours after the storm, never intending or equipped for people to stay but unwilling to turn anyone away.

A health care company pulled a trailer into the lot. They are trying to find an outdoor shower facility and a laundry truck, because they’re fearful this might be the only long-term solution for many of the displaced. Volunteers scramble around. “I’ve got two that need undergarments,” one said. “Do we have socks?”

Byerly-Zuck’s son is used to having a routine: bed at 8 p.m., a nap in the afternoon. But he’s having trouble sleeping. She can’t get him to go down for a nap, and she couldn’t get him to sleep on the cot they share until after midnight Sunday. She is worried about what all this uncertainty is doing to him.

He’s close to his grandfather, who is at a Nashville hospital recovering after his home collapsed onto him. Their neighbor died. Other people they know in nearby apartments are missing.

“I will need therapy after this; we will all need therapy,” she said, because here they exchange stories of the horrors they survived, and the people they know who didn’t.

She answers many questions about their future the same way: “I don’t know.” She’s desperate and sad — she doesn’t even have a driver’s license anymore — but she tries to pretend she isn’t scared so her son won’t get scared, too.

She guesses they’ll spend Christmas in the shelter.

All she can think to do is pray.

There was one blessing, she said: On Sunday night, a neighbor called and said they’d found the box with her baby’s ashes, unbroken, amid the rubble. 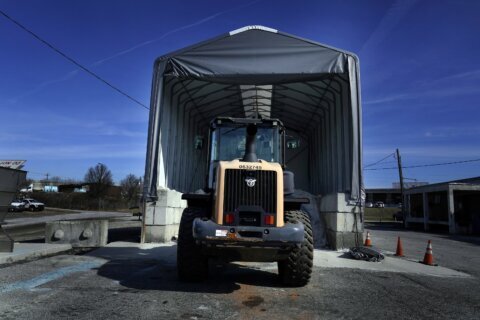