A woman found dead in her garage was the mother of the knife-wielding man fatally shot by police at the home over the weekend, Maryland officials said.
Listen now to WTOP News WTOP.com | Alexa | Google Home | WTOP App | 103.5 FM

GLEN BURNIE, Md. (AP) — A woman found dead in her garage was the mother of the knife-wielding man fatally shot by police at the home over the weekend, Maryland officials said.

Anne Arundel County police officers arrived at the Glen Burnie home Sunday after a 911 caller said a male family member with a knife had chased her from the home. The caller also said a woman who lived there couldn’t be accounted for, according to a news release from the attorney general’s office.

When Yorro refused to drop the knife, officers fired beanbag rounds and used a stun gun, but neither was effective, authorities said. That’s when officials said Cpl. J. Burger shot Yorro multiple times, killing him at the scene. Yorro’s mother was found dead in the garage and had suffered trauma, officials said.

Court records show that Yorro’s mother, Valentina, sought a protective order for herself and her 8-year-old granddaughter against her son last year, The Capital reported. She wrote that her son was using drugs and having hallucinations. She also filed for emergency custody of his daughter the same day.

“My son is very confrontational to the point that I have fear for my safety due to his unstable behavior,” Valentina Yorro wrote. “He would get right at my face with a eerie blank look on his face, and gets to the point that nothing scares him, not even if I tell him I will call the cops.”

Valentina Yorro’s petition for emergency custody of her granddaughter was dismissed after his fiancee, Siera Monroe, testified. She was granted a temporary protective order, but later asked a judge to dismiss her request.

“It was very heartbreaking for me to watch someone that I loved so dearly … suffer the way he suffered,” Monroe said. “I’m just trying to tell myself that he’s not suffering anymore.”

The couple, their daughter and other relatives were staying at Valentina Yorro’s home after Thanksgiving, Monroe said. Family members saw Digno Yorro carrying a knife Sunday and realized that they couldn’t find his mother. When Monroe tried to check the garage, she said Digno Yorro tried to stop her and threatened to stab her if she went outside. She fled with her daughter and called police.

Monroe tried to record with her cellphone camera, but said an officer demanded she put it away, saying she could be detained. She said she heard officers’ warning and later about six gunshots.

Officers’ body cameras were active during the incident, the attorney general’s office said, noting that it generally releases footage within 14 days of an incident. 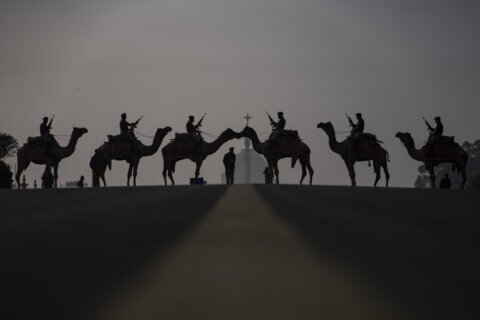