The suspect also worked at the hospital as a nursing assistant, police said, but it was unclear how the two knew each other. Assistant District Attorney Chesley Lightsey said the suspect’s motive was unknown, but the preliminary investigation leads them to believe the two were friends and the victim was targeted.

“It is pretty clear as it relates to the murder that happened of a 42-year-old, completely innocent victim, in Jefferson Hospital that the two people knew each other and early indications are that they were actually friends,” Lightsey said. “We don’t know what the motivation was that caused our suspect to go in and murder the person. But he was clearly, based on everything I know, targeting this individual.”

The suspect was able to get inside the hospital despite being armed because he had access to certain areas since he was an employee, according to police. He was wearing body armor and had multiple weapons, including an AR-15, police said.

The suspect fled the hospital in a U-Haul truck and was seen heading toward I-95, waving a large gun.

A short time later, the suspect got into a shootout with police in a wooded area near the School of the Future, a public high school in the city.

At least two officers were shot – one in the right arm and the other suffering a graze wound to the nose, according to police. One of the officers has been released from the hospital while the other remains at Penn Presbyterian Medical Center.

The suspect was hit in the upper body and neck and was in critical condition, but is expected to survive, according to police. 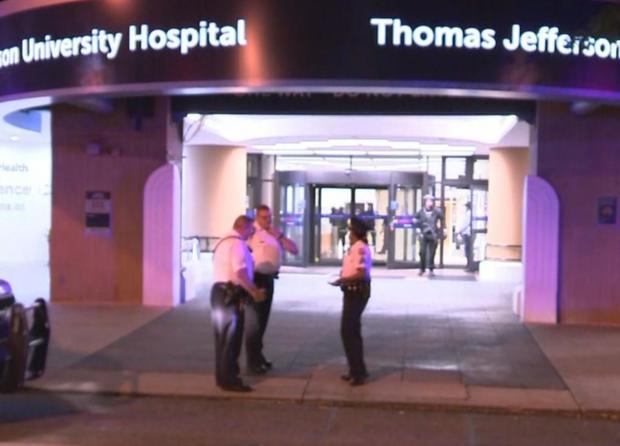 Scene outside Jefferson Hospital in Center City, Philadelphia after male nurse was shot and killed inside by someone police say was wearing scrubs early on Oct. 4, 2021.

“When the officers arrived there, four of our 16th district officers encountered the male,” Police Commissioner Danielle Outlaw said. “The male who was the shooter fired at the officers, and four of the officers returned fire. We learned that he was wearing body armor and was carrying multiple weapons in addition to the long gun, which was believed to be an AR-15. He was also carrying some form of a handgun, a semi-automatic handgun.”

All three were taken to taken to Penn Presbyterian Medical Center.

Illinois police officer is shot and killed near St. Louis