Here’s how to help Afghan refugees

Since the Taliban‘s takeover in Afghanistan earlier this month, organizations across the globe have worked to address the country’s growing humanitarian emergency. As the U.S. scrambles to evacuate American citizens and its allies, Defense Department officials said the U.S. will make space for up to 22,000 Afghan refugees on its military bases, but that capacity can be expanded if needed.

Upon arriving in the U.S., most refugees are sent to Fort Lee in Virginia, where they undergo health screenings and background checks, according to the Pentagon’s Afghanistan Crisis Action Group director Garry Reid. Multiple governors, including those in Arizona, California, Maryland and New York, have said they will take in Afghan refugees in their states.

For more on how you can help, here are three organizations providing housing, transportation and other assistance to Afghan people:

As of August 23, Lutheran Social Services said it has worked to resettle more than 250 Afghans in the U.S., and it expects a “steady and increasing” number of referrals in coming weeks.

Autumn Kendrick, a spokesperson for the nonprofit, said “the extraordinary help of the community” has made it possible to accommodate the recent influx of refugees. Uber and Lyft have donated free transportation for daily tasks, such as trips to the grocery store or job interviews, and Airbnb recently donated $70,000 for temporary bookings, Kendrick said.

“We’re very humbled to be a part of this historic welcome and be able to provide housing, transportation and other basic needs to these new neighbors that are so overjoyed to be here and to have that safety and security that they haven’t had before,” Kendrick told CBS News. “We’ve seen an emotionally overwhelming number of community support and that’s so great to see.”

Refugees are paired with a case manager “right away” to assist them with securing long-term housing, transportation and meals, Kendrick said. Over the course of three months, families are provided with health screenings and language classes, and children are enrolled in K-12 public schools. The group also helps them enroll in government programs they may be eligible for, including Social Security and Medicaid.

The organization has asked for volunteers to assist with transportation from the airport and temporary housing for refugees in homes while they await their own long-term accommodations. The nonprofit organization is also asking for cash donations, as well as household supplies, laptops, gift cards and school supplies to be dropped off at designated locations.

Islamic Relief USA focuses its efforts on those who will remain in Afghanistan.

“As much as we’re here to support refugees, from all our decades of doing this work, people prefer to stay where they’re from or where they have roots, where they have family,” Christina Tobias-Nahi, communications director at Islamic Relief USA, told CBS News.

On August 17, Islamic Relief USA issued an emergency appeal for millions of dollars in donations. The organization said it has teams on the ground in Kabul, Balkh, Herat and Nangarhar to distribute basic necessities.

“We are not supporting anyone to get out. That’s not the kind of work that we do,” Tobias-Nahi said, adding that evacuations are left to partner organizations. “We’re responding to the people who are either internally displaced, and those who are actually crossing borders and going to become refugees.”

According to the United Nations Human Rights Office of the High Commissioner, 270,000 Afghan people have been internally displaced in the country since January 2021. A month ago, an estimated 18 million Afghans faced a “dire humanitarian situation,” according to Deborah Lyons, the secretary general of the United Nations’ special representative for Afghanistan.

Islamic Relief USA has asked for monetary donations for emergency necessities like food, water, hygiene materials and tents for people living in Afghanistan. Donors can choose where they send funds, whether to women, orphans, refugees or other groups. The organization, which has headquarters in Washington, D.C., also has offices across the nation where volunteers can help assemble boxes of necessities, which are then sent to teams for distribution in Afghanistan.

No One Left Behind

“Thousands of eligible people who were in the system are still left behind,” former Afghan interpreter and program manager at No One Left Behind Ahmadullah Sediqi told CBS News’ Vladimir Duthiers.

Sediqi, who still has family left in Afghanistan, said “it’s a critical conflict situation.” He is working to help other families evacuate while still worrying about his own. He has advised both his family and Special Immigrant Visa holders to stay home unless an embassy official tells them otherwise.

According to the Consular Affairs Bureau of the U.S. Department of State, it takes approximately 13 months on average to process a Special Immigrant Visa in Afghanistan. No One Left Behind said it hopes to “fix the State Department’s 14-step SIV process.”

“We’ve promised them,” Sediqi said. “It’s time for us to keep our promise.” 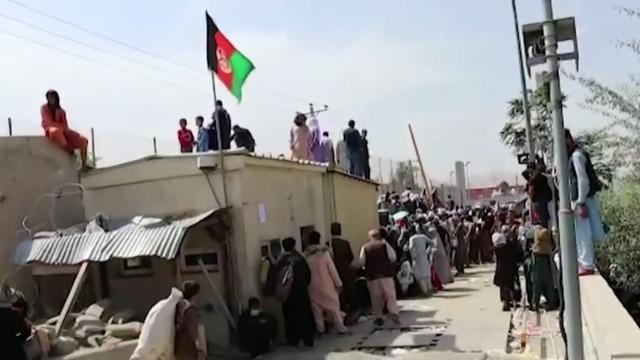 No One Left Behind, along with the two other organizations that make up the Save Our Allies Coalition, has evacuated 5,289 people from Afghanistan to date. The organization has asked for monetary donations to assist in the costs associated with getting even more U.S. allies out of Afghanistan.

“When we were in Afghanistan, interpreters were a bridge between the US government and the Afghan government, the US civilians and Afghan civilians, but over here, this organization works as a bridge between the interpreters’ families and you,” Janis Shenwari, the organization’s cofounder, said in a statement. “We can’t do anything without your support.”

afghans | airbnb | No One Left Behind | pentagon | taliban | volunteering