Wiley now has the support of two of the state’s highest profile members of Congress in Ocasio-Cortez, who represents parts of Queens and the Bronx, and Rep. Hakeem Jeffries, chair of the House Democratic Caucus.

Wiley has received a late flurry of progressive endorsements over the past couple days. State Sen. Julia Salazar and State Assembly member Maritza Davila announced their support on Friday and the Working Families Party, which had initially listed Wiley as their third pick in the ranked-choice vote, has bumped her up to No. 1.

“New York City’s next mayor needs to be a progressive fighter, ready to reimagine a New York that works for every single community,” Bowman wrote. “As an educator, husband, and father of three, it is my honor to endorse Maya Wiley to be our next Mayor. Let’s go!”

“Having the support of Rep. Ocasio-Cortez means the world to me,” Wiley said. “AOC is a fearless champion for our city in Congress. She has fought for working people, taken-on corporate greed, revolutionized the discussion on the urgent need to address climate change, and is an advocate for a more equitable economy. Nobody says and means change like her.”

Ocasio-Cortez, who had previously indicated she might stay out of the mayoral campaign fray, made the announcement a week before the start of early voting and less than 24 hours after the New York Times reported a second sexual misconduct allegation against Stringer. He has denied the accusations from two separate women, which both allegedly took place decades ago, but has lost the backing of a number of leading progressive officials and organizations.

In a statement to CNN on Friday, Stringer said he did “not remember” the second accuser, but “if I ever did anything to make her uncomfortable, I am sorry.”

Ocasio-Cortez’s endorsement also follows reports of an intense internal feud within Morales’ campaign. Before Wednesday night’s debate, a top adviser to Morales, Ifeoma Ike, defected to Wiley’s campaign, where she has taken a senior role.

Wiley has been endorsed by national figures, including California Rep. Katie Porter, Cecile Richards, the former president of Planned Parenthood, and former Housing and Urban Development Secretary Julián Castro. In New York, her base of progressive support includes state Sen. Michael Gianaris and the Jim Owles Liberal Democratic Club, which recently switched to Wiley from Morales.

In addition to Ocasio-Cortez, Bowman and Jeffries, Wiley also has the backing of New York Reps. Nydia Velázquez and Yvette Clarke.

The announcement by Ocasio-Cortez triggered a sharp reaction from rival candidate Eric Adams, the Brooklyn Borough president and a retired former captain in the New York Police Department, who has responded to the city’s spike in violent crime by doubling down on his law-and-order message.

“Rep. Ocasio-Cortez and Maya Wiley want to slash the police department budget and shrink the police force at a time when Black and brown babies are being shot in our streets, hate crimes are terrorizing Asian and Jewish communities, and innocent New Yorkers are being stabbed and shot on their way to work,” Adams said in a scathing statement. “They are putting slogans and politics in front of public safety and would endanger the lives of New Yorkers.”

With neither of the Republican mayoral primary candidates considered serious contenders in November, the winner of the Democratic primary is widely expected to be elected to succeed de Blasio, who is term-limited and will leave office at the end of the year. 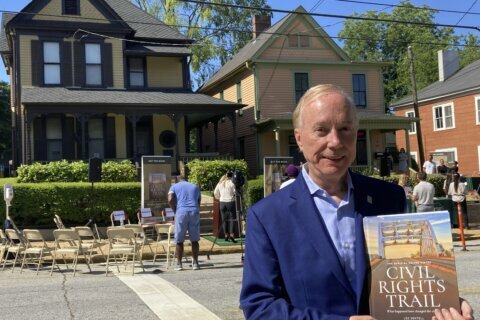