The American Civil Liberties Union and Planed Parenthood asked a federal judge to strike down the new law, which takes effect July 28, and bans all abortions except those to protect the life of the mother.

“Absent an order from this Court, plaintiffs will be forced to turn away patients seeking abortion care as of that date,” the lawsuit said. “This will inflict immediate and irreparable harm upon plaintiffs’ patients by blatantly violating their constitutional rights under the Fourteenth Amendment to the United States Constitution, threatening their health and well-being, and forcing them to continue their pregnancies against their will.”

The U.S. Supreme Court earlier this month agreed to take up a case about whether states can ban abortions before a fetus can survive outside the womb, a showdown that could dramatically alter nearly 50 years of rulings the procedure.

That case, which focuses on a Mississippi law banning abortion 15 weeks into a woman’s pregnancy, probably will be argued in the fall, with a decision likely in the spring of 2022.

Republican lawmakers in Arkansas and several other states enacted new abortion bans even before that case was announced, encouraged by former President Donald Trump’s appointments to the high court.

Arkansas was one of 14 states where near-total bans were introduced this year. The bans were pushed by Republicans who want to force the U.S. Supreme Court to revisit its 1973 Roe v. Wade decision legalizing abortion nationwide. A similar ban was signed into law in Oklahoma.

More than 530 abortion restrictions have been introduced so far this year in statehouses across the country, the ACLU and Planned Parenthood said.

“Arkansas’ anti-abortion politicians know that Roe v. Wade is still the law of the land, but they passed this abortion ban anyway, which triggers a direct challenge to Roe,” Meagan Burrows, staff attorney at the ACLU Reproductive Freedom Project, said in a statement.

A South Carolina law enacted this year that bans abortions six weeks into a woman’s pregnancy has been temporarily blocked due to a court challenge.

“Arkansas is the most prolife state in the nation, and I will continue to defend laws that will protect the life of the unborn from radical organizations like the ACLU and Planned Parenthood that promote the killing of unborn children,” Arkansas Attorney General Leslie Rutledge, a Republican, said in a statement.

Republican Gov. Asa Hutchinson signed Arkansas’ ban into effect despite concerns about its constitutionality and its lack of rape and incest exceptions.

“I have not reviewed the lawsuit, but I expect the constitutional challenge to be decided ultimately by the U.S. Supreme Court,” Hutchinson said in a statement Wednesday. “I signed this bill into law expressing my view that it would have been preferred to have included exceptions for rape and incest in the law.”

Arkansas this year enacted 20 abortion restrictions, the most in a single state since Louisiana adopted that many in 1978, according to the Guttmacher Institute, a research organization that supports reproductive rights.

Arkansas already had some of the strictest abortion measures in the country and two years ago Hutchinson signed into law a measure that would ban the procedure if the Roe decision was overturned. Another measure Hutchinson signed in 2019 banning abortions after 18 weeks of pregnancy is on hold due to a legal challenge. 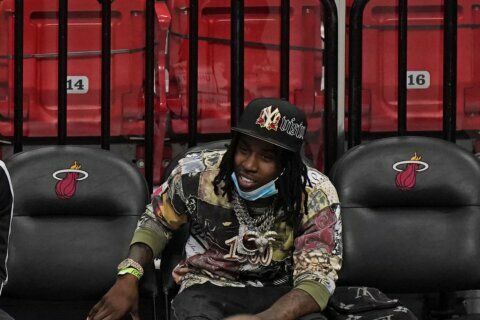