It's a moment 100 years in the making: Women are graduating Thursday alongside their male counterparts for the first time at the Marine Corps Recruit Depot in San Diego.
Listen now to WTOP News WTOP.com | Alexa | Google Home | WTOP App | 103.5 FM

It’s a moment 100 years in the making: Women are graduating Thursday alongside their male counterparts for the first time at the Marine Corps Recruit Depot in San Diego.

The recruits of Lima Company include the first platoon of women who completed the depot’s rigorous 13-week boot camp, which is traditionally reserved for male recruits.

Staff Sergeant Amber Staroscik, who led the women alongside four other female drill instructors, commended them for changing the boot camp’s history.

“And not only did we change it, but we absolutely just shatter ceilings with this,” Staroscik said. “They did outstanding.” 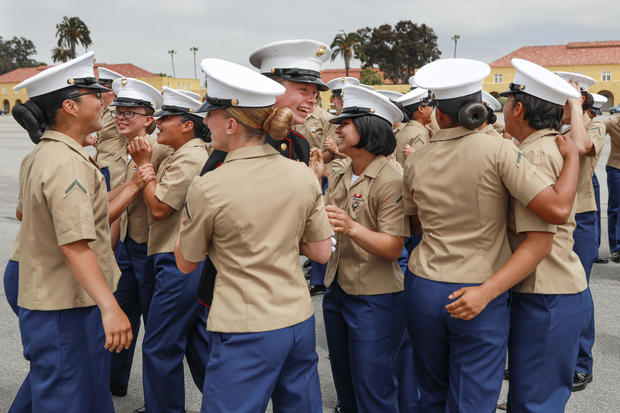 Female Marines from Lima Company, 3rd Recruit Training Battalion, congratulate each other after graduating from boot camp at the Marine Corps Recruit Depot on May 6, 2021, in San Diego.

The historic event comes after new legislation is requiring fully integrated boot camp training in San Diego by 2028. The other Marine Corps boot camp, which is located in Parris Island, South Carolina, is already fully integrated.

“When I was told I was going to San Diego and I would be making history, it’s something that I couldn’t pass up,” said recruit Anne Margret Frazier.

Some recruits, about 10-15%, drop out each year. The women kept about the same rate, with 53 of the 60 who started making it to the finish line.

Staroscik said the significance of the women’s success was not lost on her while she was leading them through boot camp.

“It was definitely humbling to be put in that position,” Staroscik said, adding, “I knew how big of a deal this was.”

Before graduation, every exhausted recruit — male or female — completed the notorious “Crucible,” which culminates at the top of Camp Pendleton’s rugged peak known as “The Reaper.” Staroscik said the Crucible requires hiking extremely steep hills, often while carrying a heavy load. 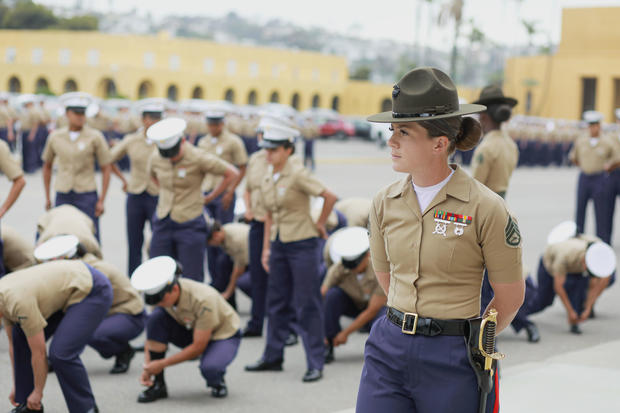 Senior Drill Sergeant Amber Starosck looks over her all-female platoon as they prepare for graduation ceremonies at the Marine Corps Recruit Depot on May 6, 2021, in San Diego.

“They conquered something that up until this moment, no other [female] recruit … had done,” Staroscik said. “So they knew they had broken that barrier that they said couldn’t have been broken.”

“I knew that every single one of them that was up there earned it,” Staroscik added.

Now, they too are the few, the proud, the Marines.