SIOUX FALLS, S.D. (AP) — The widow of the man who died after being struck by the South Dakota attorney general’s car will file a wrongful death lawsuit, her attorneys said Friday.

Prosecutors announced Thursday that they charged the state’s top law enforcement officer, Attorney General Jason Ravnsborg, with three misdemeanors but no felonies in the death of 55-year-old Joseph Boever.

Lawyers for the victim’s widow, Jenny Boever, said in a statement that they would be filing a lawsuit against Ravnsborg partly in the hopes of getting answers to lingering questions about the crash.

“The family deserves answers to what happened that night. The Attorney General should be held accountable for his actions, just like anyone else,” lawyer Scott Heidepriem said in the statement.

Another Boever family lawyer, Greg Eiseland, said the lawsuit would be filed soon.

The attorney general said through a spokesman Thursday that he doesn’t plan to resign and looks forward to his day in court.

Ravnsborg, who was elected to his first term in 2018, initially told authorities that he thought he had struck a deer or another large animal as he was driving home to Pierre from a Republican fundraiser late on Sept. 12. He said he searched the unlit area with a cellphone flashlight and didn’t realize he had killed a man until the next day when he returned to the accident scene on U.S. 14 near Highmore.

After an investigation that stretched over five months, prosecutors said they still had questions about the crash but were unable to file more serious criminal charges against Ravnsborg. They charged him with careless driving, driving out of his lane and operating a motor vehicle while on his phone.

Though prosecutors said he was not using his phone at the time of the crash, he had been using it while driving about one minute before. The attorney general could face up to 30 days in jail and up to a $500 fine on each charge, if convicted.

Beadle County State’s Attorney Michael Moore, who assisted with the investigation, said Thursday that investigators weren’t able to determine why or how long Ravnsborg had been driving outside of his lane leading up to the crash or whether he had been aware he was outside of it. He said prosecutors didn’t find evidence to warrant felony charges of vehicular homicide or manslaughter, which could have meant years of prison time. But he suggested that “the victim’s remedy is in civil court.”

Gov. Kristi Noem has said she will have the Department of Public Safety, which oversaw the investigation, release more information within a week. 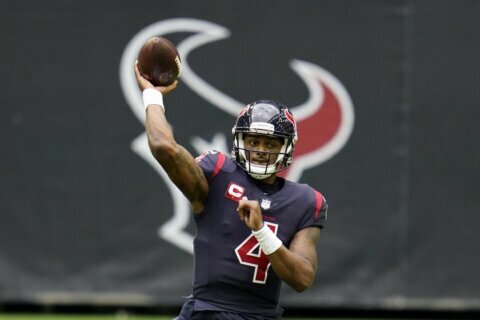 Attorney: Accusations against Texans QB based on lies