SONOMA, Calif. (AP) — It was just another Sunday night. Sure, the wind was kicking up, but for hundreds of thousands of people in California’s wine country, their minds were on the week ahead: school and homework, jobs and email, dinner plans and movie nights.

Overnight, those winds brought flames, devastation and changes to countless lives. Some permanent, others temporary.

So many busy lives have now slipped off track, grossly interrupted by a weeklong complex of historically destructive wildfires that killed dozens of people and destroyed more than 5,000 homes and other structures.

Santa Rosa Junior College student body president Batel Silimon, 19, no longer has homework looming — classes were cancelled all week. She has bigger problems now: Her family lost their home and they are crowded into a battered recreational vehicle.

Santa Rosa auto mechanic Ernest Chapman’s work is gone. Five motorcycles and a Land Cruiser he was restoring burned, along with his home and tens of thousands of dollars’ worth of tools.

Medical records clerk Sheri Laugero was given the entire week off. Her mobile home was saved by a neighbor who spent all night spraying it with a hose, but the unexpected time is hardly respite. She’s been staying with friends, barred from returning home by an evacuation order, her life on hold.

Fall is harvest time in Northern California. And while some are gathering the last grapes from vineyards, others are searching for lost loved ones or planning memorial services for those who died.

“Everything changed, everything came to a stop,” said Christine Tye, who lost her Sonoma home early Monday, as flames ripped through her neighborhood.

A week ago Tye went to bed excited about her upcoming trip to Guadalajara, Mexico. She’d be judging Labradors at a national dog show, an honor and adventure for the American Kennel Club judge who has raised her own champions.

It was 2:30 a.m. when she awoke and realized her house was completely surrounded by flames. Outside, her tractor and Mercedes sedan were on fire, but her SUV between them seemed drivable. She heaved her black labs Frankie and Truffle, inside crates, into the vehicle, along with her cat Marshmallow.

Two other cats, Soy and Ashley, had bolted from her bed. Her husband, recovering from shoulder surgery, jumped in.

“Life changes fast,” she said. She was wearing a T-shirt and flip flops. Within hours she was cancelling her trip to Guadalajara. Soy and Ashley are still missing.

“This is truly one of the greatest, if not the greatest, tragedies that California has ever faced,” said Brown. “The devastation is just unbelievable. It’s a horror that no one could have imagined.”

The closing of most businesses in and around fire areas, and the wide-scale relocation of townspeople has interrupted the simplest of daily routines.

In Sonoma, a CVS pharmacy was one of just a handful of businesses open through the week, and staffers who could make it to work filled prescriptions for the few customers still coming in.

“If any one’s going out for coffee, I haven’t had one yet,” said a clerk filling drug orders.

Her colleagues broke the news to her: All the coffee places they knew of in town were closed due to the fire. How about this one? That one? The clerk asked. Closed too, they said.

Evacuees Barbara Chiado, 65, and her husband Randy, 67, were having a tough time Saturday at their temporary home — the Sonoma-Marin fairgrounds, where they’re waiting to be allowed to go home.

Barbara said she missed her bed, her kitchen and television.

The couple would be spending the night with other evacuees in a room set up with cots.

AP reporters Ellen Knickmeyer in Sonoma and Paul Elias in Santa Rosa contributed to this story. 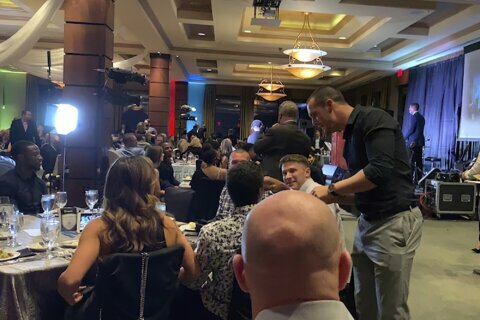