WASHINGTON — The Islamic State of Iraq and the Levant, or ISIL, released a video Wednesday of an Israeli Arab teenager about to be executed. He allegedly confessed to being a mole for Mossad, the Israeli spy agency.

If the age of the 19-year-old executed in the video isn’t shocking enough, the age of the killer is: The trigger of a semi-automatic handgun is pulled at point-blank range by a 13-year-old French boy. After shooting him in the head, the unnamed boy pumps several more shots into the limp body of the victim.

The killing is presided over by Sabri Essid, the half-brother of Mohamed Merah, the perpetrator of the shooting spree that targeted French soldiers and Jewish civilians in Montauban and Toulouse, in the Midi-Pyrénées region of France, in March 2012.

Intelligence sources say Essid was arrested in late 2006 by U.S. forces on the Iraqi-Syrian border. He and Thomas Barnouin, both French nationals, were identified as members of the so-called “Toulouse network.” Essid spent about four years in Fleury-Merogis prison, near Paris.

He is out of prison and is standing next to the young shooter in the video.

ISIL and its sympathizers bragged about its “Cubs of the Caliphate” program in recent online video postings, showing children as young as 6 or 7 involved in training camps. The children are trained in firearms use and other military tactics before being dispatched to guard borders and facilities.

But the youngsters are not just fighting with ISIL; they are dying. According to ISIL defectors, they are used as human shields and suicide bombers.

Another 13-year-old, Abu Bakr al-Faransi, who traveled from a restive part of Strasbourg, in eastern France, to Syria with his family, was killed in mid-January while guarding a frontier post in Syria.

The lure of ISIL is confounding to some experts.

“I understand why Iraqis are participating — because for them, it’s the most important, most powerful source to fight the Shiite regime,” said Petra Weyland, a lecturer at the George C. Marshall European Center for Security Studies in Bavaria, Germany.

In an interview on the sidelines of the Marakesh Security Forum in February, Weyland admitted, “I still don’t understand the phenomenon; I think it’s too new.”

She says she believes the draw for Europeans is not the same as for Middle Easterners. The driving force in Europe she said, is “the Salafi environment, which is very, very, very attractive and it’s still gaining popularity.”

Salafism is a brand of Sunni Islam that condemns theological innovation and promotes practices that date back to the earliest times of Islam.

But prominent members of the Islamic community are warning against being deceived by the promises of radical jihadists.

“Al-Qaida, ISIS and their ideological allies kill more Muslims than people of any other faith,” said Corey Saylor, of the Council on American Islamic Relations (CAIR).

CAIR, said Saylor, “is a natural enemy of such violent extremists. CAIR and most Muslims worldwide understand that ISIL’s plain-old-wrong version of Islam is similar to Westboro Baptist’s sickening interpretation of Christianity.” 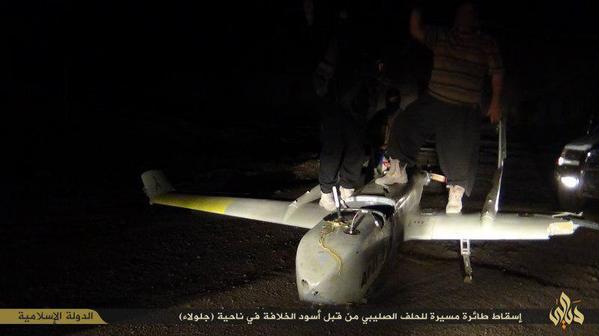 ISIL has a drone — now what?