MONACO (AP) — Lewis Hamilton declined to publicly criticize Mercedes after a botched qualifying effort at the Monaco Grand Prix. He’ll save his feedback for a private team meeting.

The driver with a record 100 poles in his career qualified a measly seventh ahead of Sunday’s race.

Hamilton might have picked up a few spots on the starting grid but the seven-time Formula One champion was not able to finish his final qualifying lap because the session ended when pole-sitter Charles Leclerc crashed with 18 seconds remaining in Saturday’s session.

Even if Leclerc had not crashed, Hamilton was unlikely to crack the top three.

“I can’t really say too much about it, also I don’t want to be critical of the team. But behind closed doors I will be,” he said. “There will be some tough discussions to have, tonight or maybe after the weekend. There are things that should have been done that haven’t been done. We will learn from it and come back stronger for the next race.”

“The tires were just not working,” Hamilton said. “The Ferraris and the Red Bulls definitely have better capabilities (to) get their tires working, and we as a team didn’t do a good enough job.”

It seemed as if Hamilton would struggle even before qualifying began. He was seventh in third practice and trailed rival Max Verstappen by a hefty .73 seconds. Mercedes tried to improve the car for qualifying but the effort did not work.

“There were a lot of changes we did to the car. Completely wrong direction, completely missed the ball,” Hamilton said. “Then we made some changes to try and take steps backward and move the car into a different place. The car was worse than ever. So I think we really lost our way.”

Hamilton fared better in earlier practice sessions when he finished fifth and third in warmer conditions.

“Of course I have my frustrations. I was feeling hopeful on Thursday, I thought we would be able to at least fight in the top three (for qualifying),” he said. “But there are steps that we’ve taken that have led us (in) the wrong direction.”

Hamilton was outqualified by teammate Valtteri Bottas, who was third behind Verstappen and Leclerc. But Hamilton was frustrated that rivals heated their tires better in cool conditions.

“We definitely struggle, and it’s magnified here being that it’s a low energy circuit with (no) high-speed areas,” he said. “Today was much, much cooler so you saw it got worse. I’m not sure really how Valtteri was able to get his tires working.”

Hamilton could climb up one place on the starting grid if the damage to Leclerc’s car leads to gear box repairs and a five-place grid penalty. But that would do little to boost his chances of a 99th career win on arguably the hardest track for overtaking in F1. 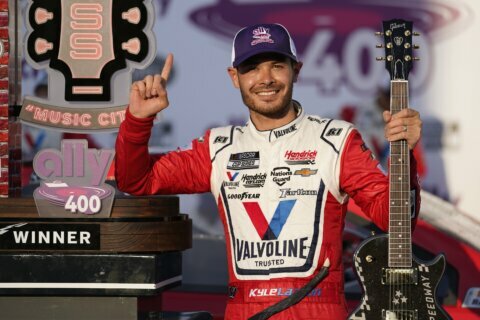