Want to know what Red Bull Rallycross looks and feels like up close? Come for a ride with driver Sebastian Eriksson around the track at RFK Stadium.
Listen now to WTOP News WTOP.com | Alexa | Google Home | WTOP App | 103.5 FM
(1/8) 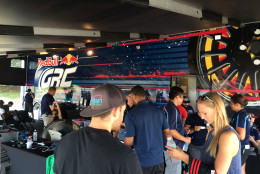 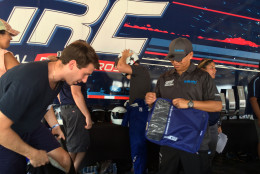 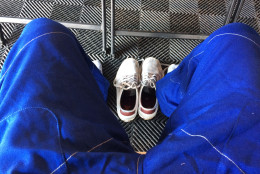 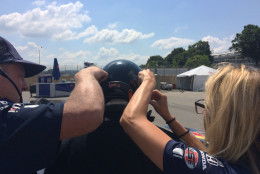 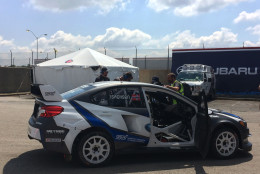 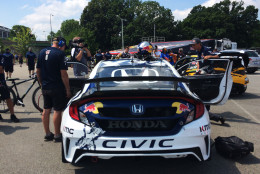 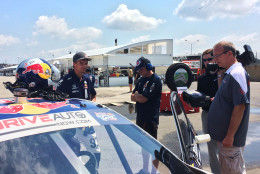 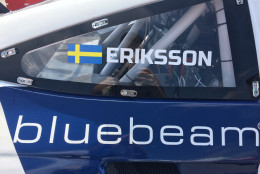 WASHINGTON — When I attended the first Red Bull Global Rallycross D.C. event two years ago, I was there among the spectators, trying to get a feel for the event as an attendee. The unfettered access and ability to get up close to the cars was unlike larger, more corporate races, but it only left me wanting to know more.

Was there a way I could take a ride in one of those things?

At the time, there wasn’t. But there was for this year’s race, which begins with practice and qualifying Friday and features the main races Saturday at RFK Stadium.

I’m riding with Sebastian Eriksson, a 23-year-old Swede who is currently running sixth in the Supercar championship standings heading into this weekend’s race. Eriksson took the time to chat with me from his homeland via Skype a couple weeks back to help prepare me for the ride.

While Rallycross may be new to many American racing fans, it’s something Eriksson grew up with.

“I always wanted to race in this kind of racing,” he said. “We had it for many years back in Europe, so we’re quite used to it.”

Unlike NASCAR or IndyCar, there isn’t a single, uniform track running the course. It’s perhaps the single most glaring difference in this type of racing.

“It’s a big challenge, because it’s so many different surfaces,” said Eriksson. “We race on tarmac, we race on dirt, and we have big jumps. It’s really fun.”

Eriksson’s Swedish accent isn’t too thick, but as I ask him about the Washington track layout and trying to improve upon last year’s sixth-place finish, something he tells me gives me pause.

“Last year, I did some crashes, so I got some impact on the car,” he mentions, offhand.

Wait, did he say impact? This is the guy who’s supposed to be giving me the ride-along?

A note about these cars — they are light, agile, and designed to get up and down to speed as quickly as possible. Needless to say, the human body is not designed to do those things.

“The car does 0-60 in under two seconds, so it almost feels like getting hit by a 20-ton truck from behind when you leave the line,” Eriksson informed me.

He said he does special exercises, particularly for his back, to help him adjust to the force and impact of the races.

“It’s not a big problem, as long as you’re driving and not thinking about it,” he said.

I will not be driving, so I will almost certainly be thinking about it. But in my head, I think may be more consumed with the heat.

Thankfully, this is not taking place earlier in the week — when heat indexes were creeping near 110 degrees — because it’s already close to 140 degrees inside the fire suit and helmet, mandatory wear for the drivers and anyone dumb enough to join them. Lucky for you, you get to watch from whatever air-conditioned office or couch you’re occupying.

As it turns out, there’s no time to think about being hot. Before you know it, you’re hurtling down the track, ever faster, looking for something to grab onto. It’s not the raw speed itself that gets you, but the quickness in which you achieve it. It’s like being shot out of a cannon, except that each new gear provides an extra explosion forward. By the time you hit the jump, you aren’t even really worried about it.

Instead of fixing the camera to the car or my helmet, I decided to just hold it for the trip, to give you a sense of the force and turbulence it exerts on your body. Enjoy the ride, and if you want to see the real thing in person, tickets are $35 for general admission to Saturday’s races at RFK.

Bowman is 2nd driver to suffer concussion in Next Gen car

Kurt Busch hopeful he can return from concussion this year