‘You need to ticket the hell out of this county’: Debate heats up over Montgomery Co. speed cameras

Drivers and pedestrians in Montgomery County, Maryland, aired out their frustrations over traffic enforcement during a public forum Monday night.

Many said protecting pedestrians was a top concern while others took aim at the county’s speed camera program. The forum was hosted by the county’s Policing Advisory Commission.

“The speed camera in its present form is a revenue-generating program that has not contributed to the county’s Vision Zero goals,” said Sharif Hidayat a retired Montgomery County police officer, who unsuccessfully ran for county council earlier this year.

Montgomery County’s Vision Zero is an initiative to eliminate traffic deaths involving drivers, pedestrians and bicyclists by the end of 2030.

According to county data, there were 40 deadly collisions on county roads last year — up from 33 in 2021.

Hidayat pointed to the number of traffic deaths as evidence that speed cameras aren’t effective at preventing such incidents.

“If you look at this data, it just shows — from 2010 to 2020 — it’s a zero-sum game,” Hidayat said. “My concern is that we keep selling this as a program that is going to reduce the amount of fatalities on our roadways when the data clearly shows not.”

Hidayat said he believes traffic deaths are correlated with distracted driving and he labeled speed as just a contributing factor.

Retired police Capt. Thomas Didone disagreed with that assessment and called comparing the data of speeding to traffic deaths, “apples and oranges.”

“You can’t take overarching county-wide data and apply it to an individual program because we don’t have cameras on every road,” Didone said.

Didone said he believes that more cameras are needed especially on arterial county roads with speed limits below 50 miles per hour, saying that the higher-speed crashes involving pedestrians are more likely to be deadly.

“As long as we maintain this criteria for a data-driven approach (it) would be a good thing for the county’s benefit in the long run,” Didone said.

Montgomery County Chief Marcus Jones added, “I will tell you that speed is really the No. 1 issue that we see, when it comes to many of our traffic collisions — the inability to avoid a collision.”

Pedestrian safety was also a key topic expressed by members of the public during the open forum. Michael Mendleson said he often walks and bikes in Rockville. He said during his testimony that he has had numerous near-misses and has even been hit once.

“Attempting to cross intersections is a terrifying experience,” he said. “ I was struck broadside by the driver of a large SUV as he pulled out of a side street. The impact on my lower leg was strong enough to bend the wheel of my bike and knock me onto the street.”

He claimed that he later tried to file a police report but officers told him they already had too many reports to process.

“You need to ticket the hell out of this county,” Mendleson said.

Meanwhile, another driver who shared his experience said pedestrians also need to take more care when they share the road.

“People will run across the roadway. I’ve never seen anyone ticketed but I have seen people struck running across the roadway,” said Montgomery County resident David Martone. “My son and I going to school actually witnessed a person being struck and severely injured for that behavior.”

Over a dozen pedestrians and bicyclists were killed in the county last year.

Jones, the police chief, said the department’s traffic enforcement efforts have been reduced lately because the department is down by about 125 officers, “which is unprecedented for our department over the past few years,” he added. 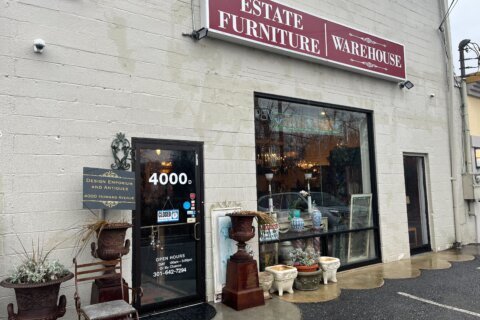