Holidays: 'Enchant' shines with millions of lights in Nats Park | Where to see holiday lights | Send in photos of decorations | How to give greener this season
Home » Montgomery County, MD News » 'Walk in Their Shoes'…

This month, displays detailing the experiences of domestic violence survivors will pop up in libraries, recreation centers and police stations. Each one will feature a pair of shoes and the stories of a particular survivor.
Listen now to WTOP News WTOP.com | Alexa | Google Home | WTOP App | 103.5 FM
(1/3) 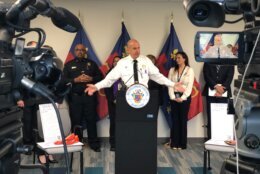 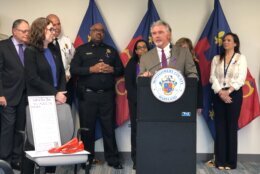 This month, displays detailing the experiences of domestic violence survivors will be placed in Montgomery County, Maryland, libraries, recreation centers and police stations. Each one will feature a pair of shoes and the stories of a particular survivor.

Cheryl Kravitz, a survivor and longtime advocate in Montgomery County, shared her story at a news conference Tuesday announcing the Walk in Their Shoes campaign.

She pointed to a pair of flats on display. “They’re flat because you need to run quickly to get out of the house when you can,” she said.

Kravitz detailed the whirlwind romance that led her to marry a man who, over time, began to push and shove her. Then the violence escalated.

“He threatened to kill my favorite dog and make me watch while he did it,” Kravitz said. Soon, punches and slaps were common.

“He was always careful not to hit my face,” she recalled. Then a friend noted the long sleeves she had taken to wearing in blazing summers, eventually asking Kravitz, “You’re being hurt, aren’t you?”

In one particularly brutal beating, Kravitz said, her abuser kicked her and jammed her arms into a hot oven. That’s when she promised herself “If I made it out alive, I would devote my life to helping other victims of domestic abuse.”

Since then, Kravitz has had a career in nonprofit work, while also working with Maryland state and local officials on services for survivors of domestic violence.

At Tuesday’s launch of the campaign, Kravitz was joined by State’s Attorney John McCarthy, who said that last year, 58 people died as the result of domestic violence in Maryland, five in Montgomery County, and another five people in the county have already died this year in domestic violence-related incidents. “I want zero,” said McCarthy. “I want zero lives lost.”

He pointed to a range of efforts including police, the sheriff’s office and schools on educating the public about domestic violence, and the services available to survivors. “The services are free,” said McCarthy. “Please let us help you, and help me, get back to zero.”

Montgomery County Sheriff Darren Popkin said the information paired with each display will be available in 65 languages.

Montgomery County police Chief Marcus Jones pointed to the members of his domestic violence unit and said ,“They get called in the middle of the night … they get out of their beds and they go help victims.”

Debbie Feinstein, chief of the Special Victims Division with McCarthy’s office, said about the services available to anyone suffering from domestic violence, “They are free; they are immigration-blind; they are confidential. Please come and seek them out for yourself, for a friend, a family member or a community member.”

Here’s information on the National Helpline.

Here’s how to get information on help in Montgomery County.

And here’s how to get help in D.C.