Hundreds of cyclists rode through Bethesda on Monday to commemorate the life of Sarah Langenkamp and to dedicate a ghost bike near where she was hit and killed.
Listen now to WTOP News WTOP.com | Alexa | Google Home | WTOP App | 103.5 FM
(1/3) 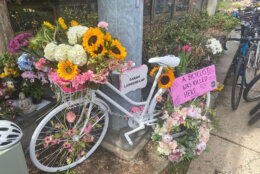 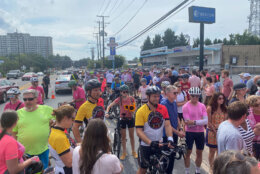 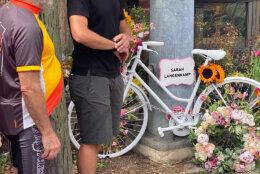 Hundreds of cyclists rode through Bethesda, Maryland, on Labor Day to a spot on River Road where Sarah Langenkamp was hit and killed while riding her bike last month.

They were there to commemorate her with a painted white bicycle, called a ghost bike, that is now chained nearby. And the family said a miracle happened while they were there.

During a moment of silence held by Sarah Langenkamp’s family in front of her newly-chained ghost bike, a woman standing in the bike lane where Sarah was hit looked down at the asphalt. There, she saw a glittering stone that didn’t seem like it should have been there.

It turned out to be a diamond.

Dan Langenkamp had received his wife’s personal belongings shortly after she was killed. The only thing missing was the diamond from her engagement ring; she wore it as a pendant around her neck.

“I actually came back here and got on my hands and knees and I scoured the site looking for it,” Dan Langenkamp said, welling with tears. “We had understood that it remained with her. It had been next to her heart. And so she wanted it, I think.”

The woman who found the diamond Monday was standing next to Sarah’s childhood best friend. He knew the diamond was missing, and it was returned to Dan and his two sons.

“We laid her at rest yesterday, and I think she needed to find the right moment to bring it back to us. Maybe it’s a sign that she’s happy and peaceful. She no longer needs to hold on to it,” Dan told WTOP. “I’ve never experienced anything like that. To have it happen at that moment is unbelievable. She wanted us to come back here.”

Sarah Langenkamp worked for the U.S. State Department with her husband; they had just moved to Maryland after being evacuated from Ukraine.

Police said Sarah was hit by a red Volvo flatbed truck while both were traveling east on River Road just after 4 p.m. on Aug. 25 near Little Falls Parkway. Police said the truck made a right turn into a parking lot while Langenkamp was in the bike lane.

Dan Langenkamp called for a renewed look at bike safety measures for streets in the Washington region and the country as a whole.

“No U.S. diplomats have been killed this year, anywhere in the world,” he said. “But three U.S. State Department officials have died in the Washington area — all hit by vehicles. Two have been hit on bikes. One was right here.”

He added, “It is unconscionable to me that Sarah would have been safer braving airstrikes in Kyiv than on the streets of Bethesda.”

He described himself as “a huge biker” and said bike lanes “have meant a lot to us over the last several years. But we have to work to make them safer. I’m not going to stop riding my bike. What I’ll do instead is band together with you to create a peloton of change.”

He said it would not bring Sarah back, but it would save lives in the future.

A GoFundMe campaign for bike safety in Sarah’s honor has raised nearly $250,000.

Dan Langenkamp said the campaign was “a testament to who Sarah was … because she did touch a lot of people’s lives in her work and in her life, as a friend and as a co-worker. But it also makes me realize that people actually care about this issue. And we want things to be different. And I hope we make good on that promise as soon as possible. Let’s just stop fooling around. And let’s just do some things that are making that will make it make where we live safer.”

Langenkamp is calling for proper barriers to protect bike lanes, more driver education and laws and enforcement that will protect cyclists.

Shortly before they chained the ghost bike to the street light pole on River Road near the Capitol Crescent Trail, Sarah’s young son Oliver shared a few words:

“We all have a giant hole in our hearts. If we all work together and keep on doing what she would have done, I think we can fill in that hole with everybody else’s love and support.”