‘Leave a lot of extra time’: Crews assess, repair sinkhole on I-270 in Montgomery Co.

A large sinkhole that materialized on one of Maryland's busiest roads could affect your commute beyond Thursday morning. Here's what you need to know.
Listen now to WTOP News WTOP.com | Alexa | Google Home | WTOP App | 103.5 FM
(1/3) 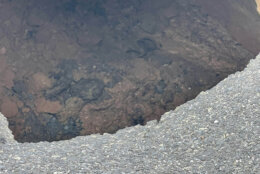 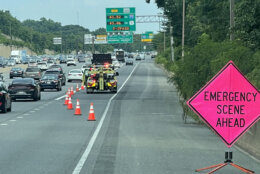 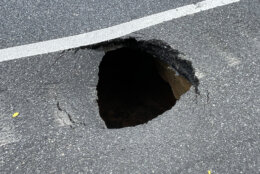 A large sinkhole that materialized on one of Maryland’s busiest roads could affect not just the Thursday morning commute. Here’s what you need to know.

The Maryland State Highway Administration was on the scene Wednesday night and Thursday morning, along with crews, to assess and repair a sinkhole that appeared on the right lane of southbound Interstate 270 before Interstate 370 (Exit 9) in Montgomery County.

What does this mean for Thursday’s morning rush?

Two right lanes will be closed on “one of the busiest roads in the state,” spokesman Charlie Gischlar, with the Maryland State Highway Administration, said. He said that he expects the morning rush hour to be “very, very busy.”

There’s no timeframe yet for how long the lanes will be closed.

Gischlar said they are trying to get people to consider alternate routes, such as Md. 355, and are encouraging them to leave a lot of extra time.

“Best thing to do if you’re coming from points Frederick and south, heading toward Gaithersburg and points south, is to give yourself a lot of extra time, make sure you have plenty of fuel in your tank and consider using Md. 355 or any other alternate routes that suit your needs,” Gischlar said.

The SHA has also worked with the Montgomery County Department of Transportation to re-time the traffic signals at Md. 355, which runs parallel to I-270, “to give the through traffic more green time for the morning commuters,” Gischlar added.

“The highest trip counts on I-270 near this work zone are usually recorded during the 6 a.m. hour, so you’d need to leave very early or during the midday in order to beat any potential delays,” WTOP Traffic Reporter Dave Dildine said.

Gischlar also recommended checking the traffic cameras on the SHA website to see how bad the backups are.

The sinkhole was the result of a broken 6-foot drainage pipe that runs underneath I-270 before Interstate 370.

“Part of that pipe, it’s corrugated pipe, has become compromised, so we had to close two right lanes at this time, so we can get in there and assess what’s going on,” Gischlar said.

He said the area underneath the hole is “extensive.”

“We have crews out there that are using video camera technology to get a good, accurate representation of the extent of the damage and then we’re going to put a crew together” and get working on fixing it “as soon as humanly possible,” Gischlar said.

The total depth of the sinkhole isn’t known yet.

Gischlar warned that the two right lanes could be an extended closure.

“We’ll know more in the coming hours and days, and we will let you know,” he added.

The initial lane closure on Wednesday afternoon did not have much of an impact on the afternoon commute and only led to minor delays — not a good indication of the sinkhole’s potential effect, Dildine said.

“I-270 has very directionally focused rush hours compared to other area highways, meaning the opposing lanes are well under capacity during peak times, sometimes by several thousand trips per hour,” Dildine said.

Montgomery Co. aims to lure in workers from states that roll back abortion rights