Three people were arrested Thursday morning after a police chase, involving shots fired at officers, shut down lanes on Interstate 495 in Montgomery County, Maryland, for more than an hour, the police said.

Police Chief Marcus Jones on Thursday afternoon said officers followed the three after their SUV was seen leaving an attempted burglary on Johnson Avenue in Bethesda.

During the chase, the SUV stopped short, and the suspects shot at them, hitting one police car and lodging a bullet in the passenger headrest, Jones said.

No officers were hurt and none fired back, Jones said. The SUV crashed soon after, near the ramp on Wisconsin Avenue toward I-495.

Two people were arrested immediately, but another ran into the nearby woods.

A Prince George’s County police helicopter helped the search, and the last suspect was found and arrested just before 4 a.m., according to police.

The police search closed lanes on I-495 for more than an hour, causing a mile-long backup.

The three arrested were all 16 years old and all from D.C., Jones said. They’ve all been charged as adults with attempted murder, first-degree assault and first-degree burglary.

He said police had connected the three with other recent burglaries in the area, and said the car they were driving, which had been reported stolen from Arlington, was a suspect vehicle in a previous burglary.

Jones also said that earlier this month, police arrested seven men between 18 and 24 years old at an apartment complex in the Crystal Rock area, where he said they had turned an apartment into “an open-air drug market.”

He said officers had been keeping an eye on the apartment when, on June 16, a neighbor flagged an officer down and said they’d heard shots fired. Bullets and casings were found.

On June 22, SWAT teams raided the apartment and found five guns, including two that had been modified into fully automatic handguns and “yet another ghost gun,” State’s Attorney John McCarthy said. A stash of fentanyl pills was also found.

None of the seven arrested were eligible to have a gun, whether due to their age or a previous record, McCarthy said.

Jones said six of the seven were gang members, and they’re all being held without bond. 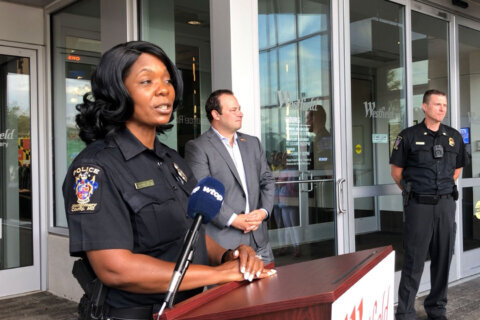 Meet me at the mall: Police have a new space in Bethesda