It's been a rough few years for election workers. And in Montgomery County, people turned out to show their support.
Listen now to WTOP News WTOP.com | Alexa | Google Home | WTOP App | 103.5 FM
(1/3) 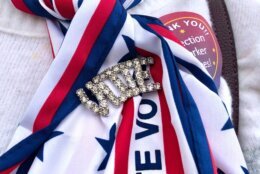 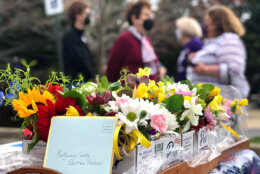 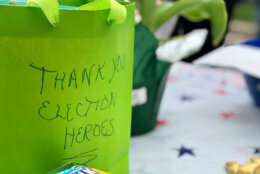 Bouquets of flowers in Mason jars filled a table with a poster-sized thank-you card as Kool & the Gang’s “Celebration” blared from a portable speaker Tuesday in the parking lot of the Montgomery County Board of Elections.

The occasion was a public appreciation for election workers as Maryland’s primary season gets underway.

As groups of elections workers filed out of their offices, Soreng told them, “I know you still have your own challenges, like maybe wondering when exactly the election’s going to be … and where exactly the precincts are going to be!”

Maryland’s redistricting process has been messy, with court challenges leading to a delay for the state’s primary. The original date was June 28, but after one legal fight, the date’s been set for July 19.

But a legal challenge to the state’s legislative district map remains in the Maryland Court of Appeals. If that map is tossed out, Maryland Attorney General Brian Frosh suggested this week that it’s likely the primary would have to be pushed back yet again.

There was a serious side to the event as well: a recognition that election officials across the U.S. have concerns for their personal safety, according to a poll cited by the Brennan Center for Justice. And that’s why thanking election workers is so important, Soreng said.

Elbridge James, a Montgomery County resident, said he’s served as an elections judge for more than 15 years. “It has been my pleasure to serve and work with you,” he told the workers, “but more important, as one of your volunteers, I really would like to applaud you all for the support and the help that you give us.”

Nina Uzick, an employee who does outreach for the Board of Elections, said: “I feel especially appreciated. But I feel appreciated every day that I can work here.”

Uzick’s parents were immigrants, and she said she’s been committed to helping people take part in the election process.

“When you see somebody vote for the first time, it makes you believe,” she said with a smile.

Acting Board of Elections Director Alysoun McLaughlin also appreciated the show of support.

“Elections are not something that a staff of 30 people administers for a county of over a million,” McLaughlin said. “We rely on election judges, and really the whole of the community, to make elections successful.”

As for the primary, McLaughlin said, “We’ll be ready whenever the election is going to be held.”