At least six people were injured, including a child, after several vehicles and a Metrobus collided in Rockville, Maryland, on Sunday.
Listen now to WTOP News WTOP.com | Alexa | Google Home | WTOP App | 103.5 FM
(1/4) 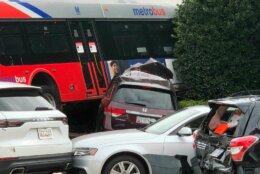 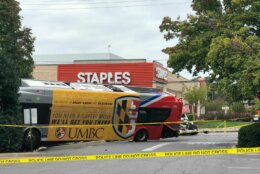 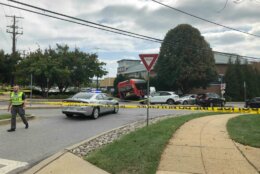 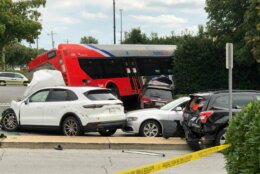 At least six people were injured, including a child, after several vehicles and a Metrobus collided in Rockville, Maryland, on Sunday.

A spokesperson for Montgomery County Fire and Rescue tweeted around 12:30 p.m. that multiple vehicles, including the Metrobus, had collided near Congressional Lane and Rockville Pike.

Six people were evaluated for injuries, including a child. Two of those injuries were said to be serious, according to Montgomery County Fire and Rescue.

Four people were taken to the hospital following the crash, and three of them were said to be taken as trauma patients. One person’s injuries were said to be life-threatening, according to Montgomery County fire spokesperson Pete Piringer.

Montgomery County Police Director of Public Information Shiera Goff said that four people were sent to the hospital including the bus driver. A Metro spokesperson said on Monday that the driver remained hospitalized with non-life-threatening injuries.

Goff said that there weren’t any passengers on the bus at the time. Four vehicles in addition to the bus were involved in the crash.

“Something happened that caused the bus driver to swerve and lose control,” she said. “The bus swerved onto Congressional, where it struck one vehicle, then causing a multi-vehicle collision.”

Police responded to the scene and conducted an accident reconstruction investigation.