The statue of a police officer called “Oh it’s you, Welcome!” was removed Thursday, so it could undergo repairs due to vandalism it endured in January.
Listen now to WTOP News WTOP.com | Alexa | Google Home | WTOP App | 103.5 FM
(1/3) 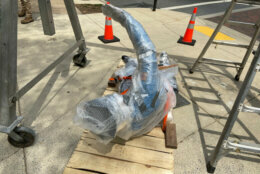 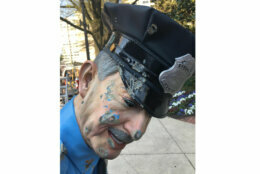 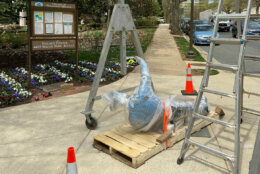 A statue near the D.C.-Maryland border that has been the subject of many selfies and has slowed down lead-footed drivers in Montgomery County for more than 20 years is absent from his spot on South Park Avenue in Friendship Heights Village.

The statue of a police officer called “Oh it’s you, Welcome!” was removed on Thursday, so it could undergo repairs due to vandalism it endured in January.

“He was struck repeatedly with something clearly heavy, he was attacked, and you could see lots of damage around his face and shoulders,” said Julian Mansfield, manager of the Village of Friendship Heights.

The beating left chunks of the statue missing. Vandals also spray-painted parts of the statue. Mansfield said this is the most damage the statue has seen and believes it occurred during one incident that happened not long after the deadly Jan. 6 riot at the U.S. Capitol.

Mansfield said police don’t know who caused the damage and it remains unclear if what took place at the U.S. Capitol motivated those responsible for defacing the statue.

He said the price tag for repairing it is $23,000, though Mansfield is hopeful an insurance policy for the statue will cover the work. “It’s an expensive fix,” Mansfield said.

He said there have been no complaints about the statue, saying to the contrary, it has received praise. Most recently people during the pandemic shared pictures of themselves posing with the statue after they placed a mask on its face.

In the past the statue has needed repair, but those repairs many times could take place without moving the statue.

“It’s pretty badly beat up and to the point where it could not be restored on site,” Mansfield said.

The man making the delicate move, starting with removing the statue on Thursday, was Ben Gage with Fine Arts Specialists.

“It is going to be taken back to the studio where it was made in New Jersey and when it is repaired and repainted, we’ll bring it back and reinstall,” Gage said.

If you look at the name tag on the officer’s shirt, you’ll see the name “McAuliffe.” Mansfield said that pays homage to longtime Friendship Heights resident, and a former superintendent of police for Montgomery County, James S. McAuliffe Sr.

Even though getting used to not seeing the statue daily will take some getting used to for people who frequent the area, it will eventually reclaim its spot near the village’s park.