A group of children in Montgomery County is leading the charge to educate other kids about the women's suffrage movement through an organization called The Yellow Roses.
Listen now to WTOP News WTOP.com | Alexa | Google Home | WTOP App | 103.5 FM

WTOP is featuring people who make a difference in the community during Women’s History Month.

A group of children in Montgomery County, Maryland, is leading the charge to educate other kids about the women’s suffrage movement through an organization called The Yellow Roses.

Carolyn Deol, 10, is a member, along with her siblings, Silas and Norah, and her cousin.

“It’s something that you have to be educated on, and not many kids are educated on it. And a lot of people think that just women always had the right to vote, but they didn’t, so I think it’s really important for them to understand how much they suffered and how hard it was and how long it took them,” Deol said.

Her mother, Kate Deol, said the idea came together after a birthday party. They thought it would be a good opportunity to bring other youth together to write letters in honor of Susan B. Anthony.

“From there, we began to dream of other women we could honor throughout the month and the kids really took off with the project,” Kate said. 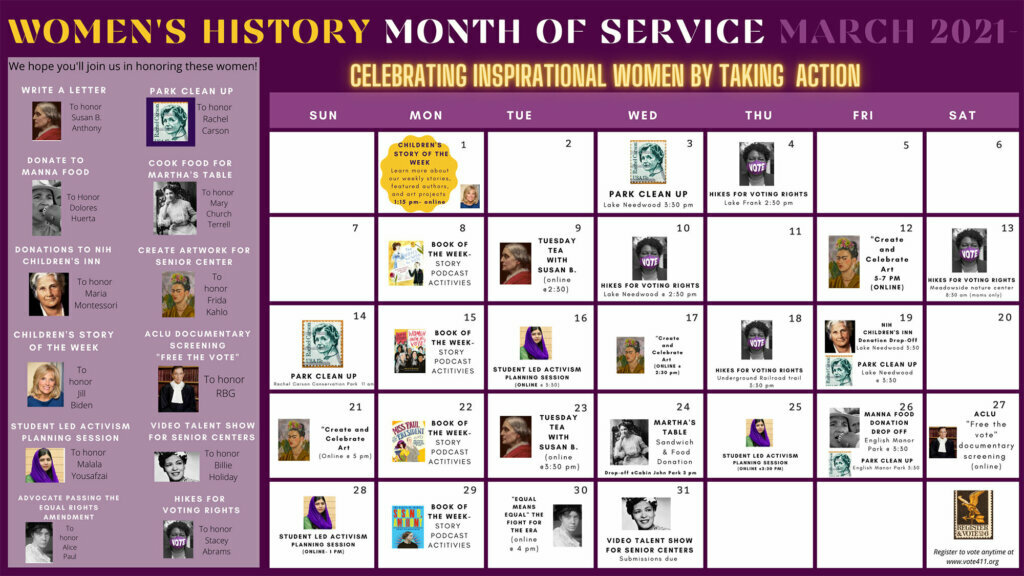 She said the time of the project launch was around last March when coronavirus caused many families to stay home. She took this as a moment to teach her kids about resilience.

“During difficult times, I have learned that helping others, finding what you can do to benefit your community, to look outside yourself for the need, and to take action to make a difference — doing those things have always benefited in my life and I was hopeful that this experience would be the same for them,” Kate Deol said.

She added that it was important to teach her kids about the women’s suffrage movement because of what they gained from it.

“Through these stories, my children have learned that through perseverance, through determination, through collaboration, you can really impact your democracy, you can fight for rights that were not previously here and win,” she said

Carolyn Deol said she hopes the organization will grow and they can continue giving back to the community.

“I would love if we got to do more service projects — we’ll definitely be doing women’s history month of service 2022, I’m sure of it!” she said.

She also hopes to be able to interview women that she admires.

“In the future, I think the coolest thing that could happen is that we interview Kamala Harris or Michelle Obama — that would be one of the most amazing things that ever happened to me,” the 10-year-old said.

The Yellow Roses will end Women’s History Month with “The Spring Bake to Donate Challenge.”

The organization will bake muffins and make trail mix and take them to Martha’s Table.

The event will be held at 900 Nelson St. in Rockville, Maryland. You can sign up to donate or participate at theyellowroses.com.